Reunited, And It Feels So Good - Haymakers Reunion, Part Two 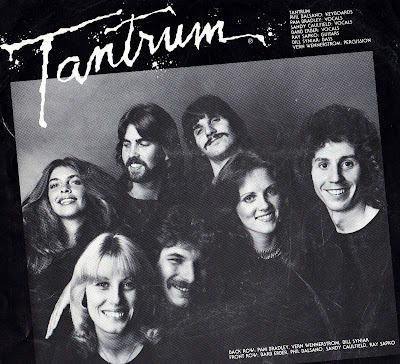 As Bitch prepared to kick off the festivities, people approached the stage to take pictures of the musicians, say hello, and shake their hands. This friendly ritual between performers and audience members would carry on throughout the day.

Bitch made quite a splash back in the late 1970s by playing hard rock at a time when few all-female bands dared to do that. One of their songs at Durty Nellie’s was about a rock and roll grandma, but there was nothing frail in the way these women approached their first performance together in over three decades. Lorrie Kountz, who had gone on to other bands like Illicit and Surrendur Dorothi after Bitch, wailed on guitar. The four members exuded a joy in performing together again, and that would be evident for all the other bands that followed. Bitch finished with a rollicking version of “Time Warp” from the Rocky Horror Picture Show.

Pezband Allstars, featuring vocalist-guitarist Mimi Betinis and bassist Mike Gorman, were the only power pop band on the bill, but they did the genre proud. “This is really quite an event, isn’t it?” Betinis noted, already feeling a positive vibe building in the room. The band opened with the lively “Please Be Somewhere Tonight” from Pezband’s 1977 self-titled debut. They tapped into that album as well as later releases, and Betinis added some strong material from his 2010 solo release, All That Glitters. “Love Is Just A Thin Veneer” in particular, proved that he hasn’t lost a bit of his gift for crafting exquisite pop melodies.

Between sets, it was interesting to see current Illinois Entertainer publisher John Vernon conversing with the publication’s founder, Ken Voss. By that point, the room was filled to capacity. Vendors had set up shop in the vestibule, offering Haymakers Reunion t shirts and CDs. Folk singer/author Dean Milano was selling copies of The Chicago Music Scene: 1960s and 1970s, (an apt book for this event) and singer Jimy Sohns had reps hawking Shadows of Knight merchandise.

As I mentioned in yesterday’s post, an ill-planned dinner break (it was talking to people on the way out that threw off my timing) caused me to completely miss One Arm Bandit’s set. I apologize to them, but I did hear is was an impressive performance. Guitarist Hoppy Niles, whom I interviewed for a paper called Metro Calendar back in the days when he was with Pin-ups, is one of the more inspiring musicians in Chicago rock.

I also missed Hounds opening their set with “Drugland Weekend,” one of the songs I (and probably everybody else) had most wanted to hear that night. I still have fond memories of WXRT playing “Drugland Weekend” every Friday, as the Hounds quickly rose from the Chicago club scene to a debut on Columbia Records. Lead vocalist John Hunter, dressed in a suit and tie and looking like a cross between Roger Daltrey and Tom Baker era Doctor Who, bounced from the mic to the piano while playing songs from the two Hounds albums, as well as “Tragedy” from his solo LP. After a rousing set, he autographed LPs for people who approached the stage.

Dreamer boasts a trio of singers who take turns on lead vocals and combine for some amazing harmonies on melodic hard rock songs. Sadly, the band’s original drummer has passed away. Greg Potter, a veteran drummer with several bands, did a great job filling in. In a definite departure from Dreamer’s original days at Haymakers, singer-bassist Mark Dawson, who’s also a current member The Grassroots, held up an iPad, on which a woman could be seen waving to the crowd.

In addition to playing at Haymakers, Tantrum was one of the bands that brought a party atmosphere to the Rock Around The Dock stage at ChicagoFest. Comprised of singers Barb Erber, Sandy Caulfield, and Pam Bradley, backed by five musicians, Tantrum played melodic rock with an emphasis on harmonies. At times, their set at the reunion had the appeal of a well-orchestrated Las Vegas revue, and they brought out some impressive guest musicians. Surprisingly, Tantrum didn’t perform “Happy Yesterdays,” a song with a funny reference to the reunion’s co-host, Dirty Dan Buck.

It’s always a good sign at one of these marathon events when performers stick around after their show to support the acts that come on after them. Bitch’s drummer Donna Fraser (who had flown in from Texas for the reunion) and bassist Donna Kirkendall Lucier were still in the audience a good five hours after their set, cheering on Madfox (and later, Jimy Sohns). Which was only fitting, since Madfox guitarist Michael J. Kurtz had already been hanging out at Durty Nellie’s while Bitch was playing. Kurtz’s blistering duets with his fellow guitarist gave Madfox a great deal of firepower, and the band has a true showman in its lead singer. The audience was particularly responsive to rampaging covers of The Tubes’ “White Punks On Dope” and Al Green’s “Take Me To The River.”

Jimy Sohns and his band were the final act, and they got a boost from Kurtz, who hung around for a few songs, and Dirty Dan Buck, who shared a mic with keyboards player Cindy Gotshall on “Gloria.” Tantrum vocalist Pam Bradley also came onstage for a number, and I began hoping for a huge finale involving all the musicians who were still on hand. That didn’t happen, but Sohns’s set, which included covers of The Doors and Rolling Stones, was still a fun way to finish the night.

The best way to judge how much the Haymakers Reunion meant to those in attendance is to scroll down the event’s Facebook page. When organizer Maureen Welch Bonifazi posted, “Who’s interested in another reunion this summer?” the responses included, “Oh Hell, Yes!,” “Abso-freakin-LUTELY,” and “How about tomorrow?”