Reunited, And It Feels So Good - The Haymakers Reunion, Part One 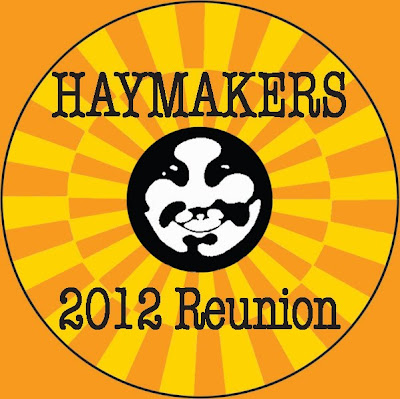 Let’s hear it for marathon entertainment. Not the couch potato variety where you just slump back and watch multiple episodes of Gilligan’s Island, but the kind where you travel to a destination to celebrate something you really enjoy, with like-minded people. Bigger events, like Fest For Beatles Fans, C2E2, or ComicCon provide the most variety, but I’ve been known to sit for hours in the Mary-Arrchie Theatre’s storefront space watching one production after another during Abbie Fest, or stand for hours watching bands at International Pop Overthrow.

The Haymakers Reunion at Durty Nellie’s in Palatine this past Sunday night had that same communal ambience. Organized by Maureen Welch Bonifazi, former Illinois Entertainer editor Guy Arnston, Cathy Powers-Hall, Christine Trinity, and Chuck Fieldman, the event brought together hundreds of former regulars of Haymakers, a club that hosted the area’s best-known bands back in the 1970s and 80s, to see if they could recapture the magic. All of the profits (after expenses) will go to help two charities: Little Kids Rock, which provides free musical instruments and qualified instructors for K to grade 12 kids in public schools, and Caring Arts, which enlists artists and performers to help those afflicted with cancer.

Eight groups from that era, including, Bitch, Dreamer, Hounds, Madfox, One Arm Bandit, Pezband Allstars, Jimmy Sohns from The Shadows Of Knight, and Tantrum would provide the entertainment. Even though a few of these acts hadn’t performed in over 30 years, they were all impressive in their half-hours sets. Living just five minutes away from Durty Nellies made it easy for me to attend, but I certainly wasn’t the only one who stayed for the entire thing. Sadly, a miscalculation on my part as to when to take a dinner break, resulted in my missing One Arm Bandit’s set and part of the Hounds’ set.

As Durty Nellies began to fill up with a mix of fans and musicians, there were laughs of recognition, hugs, handshakes, and a lot of catching up to do. Mitch Michaels, a popular on-air personality for several of Chicago’s rock stations over the years, and Dirty Dan Buck, former lead vocalist for the hard rock band The Boyzz, served as the reunion’s tireless co-hosts; staying fresh and funny throughout the nearly nine-hour event. Spotting a picture of the notoriously party hardy Rock Around The Dock stage at ChicagoFest on the club’s big video screen, Buck joked, “Rock Around The Dock. If you remember it, you weren’t there.”

The Haymakers Reunion kicked off with a short set of cover versions from New Soundz, a band of young musicians from the Little Kids Rock organization. They were well-received, and afterward it was evident how proud their parents were of them. From then on, it was up to the official reunion bands to keep the party going.

Coming tomorrow: A look at the bands.