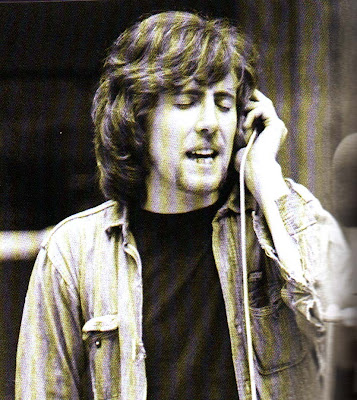 “Happy birthday to me!” 1969 photo of Graham Nash by Henry Diltz from Nash’s Reflections box set.

Today is Graham Nash’s birthday. At age 70, he’s still passionately involved in music, photography, and of course, political causes. He and longtime friend David Crosby recently created the Blue Castle Records label, with the first release being Another Stoney Evening, a vinyl and digital recording featuring the duo performing live at a 1971 concert.

The other day, I was happy to see my hometown library now has a copy of the DVD, The Hollies: Look Through Any Window -1963 - 1975. Nash, along with his fellow original Hollies, Allan Clarke, Tony Hicks, and Bobby Elliott, provides fascinating commentary on the hit songs that are showcased in this documentary.

In honor of Graham Nash’s birthday, here’s an excerpt from a review I did of his solo performance at the Park West in 1980. It ran in the Chicago Illini newspaper.

It was surprising to see Graham Nash ignore most of the material from his impressive new album Earth & Sky at his recent Park West show. Even the title track, a catchy political fable, and the first single, “In The 80’s,” were passed over in favor of older songs. He did perform “Out On The Island” and “Barrel Of Pain,” as well as the touching “Magical Child,” which he dedicated to his two sons.

Otherwise, Nash stuck with the music he created with Crosby and Stills. There was nothing from his early days with The Hollies, although he did tell the audience that his first visit to Chicago was with the English band back in the 1960s. Nash likewise ignored his entire solo effort, Wild Tales, and barely touched his critically acclaimed debut, Songs For Beginners.

Still, the show was an entertaining trip through the musician’s career. Backed by acoustic guitars and keyboards, Nash excelled on old favorites like “Teach Your Children” and “Our House.” Living room stage props, including oriental rugs and a fish bowl with live goldfish, added a comfy ambience. A stirring rendition of “Wind On The Water,” Nash’s lament of the slaughter of whales for commercial use, was another highlight.

Nash performed the politically-charged “Chicago” for an encore, and drew a cheer from the audience with the altered line, “Don’t ask Jane [then mayor of Chicago, Jane Byrne] to help you or she’ll turn the other ear.” It’s clear Nash holds a certain magic over his fans and remains a vital figure in contemporary music; a sort of ageless troubadour.

Funny to think I referred to Graham Nash as ageless back in 1980. Here’s a toast to the man who still exudes compassion and a youthful sense of rebellion here in 2112. Happy Birthday, Graham!