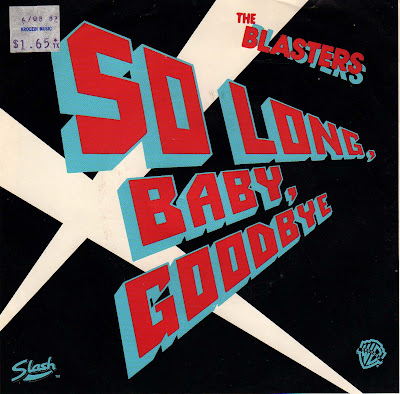 Back in 1981, when I was working at a Mom & Pop record store in the Ford City Shopping Mall on Chicago’s southwest side, my boss didn’t open many records to play on the stereo. We had Michael Jackson’s Thriller, and a handful of heavy metal releases, but other than that, the only records available were ones that customers had returned. Fortunately, someone brought back The Blasters’ self-titled debut, and I played it just about every night I worked. I bought this single at Kroozin Music, which was a much more hip record store than the one where I was employed.

Breaking up has never been easier than it was for the protagonist of “So Long, Baby, Goodbye.” Voiced by singer-guitarist Phil Alvin, who also contributed some spirited harmonica playing, the lyrics are basically a checklist of reasons for splitting, including, “You made a lot of promises I aint seen yet.” The relationship seemed doomed from the start, as Alvin recalls, “There was a cold wind blowing on the night we met/The leaves fell from the trees.”

The song has a rollicking arrangement fueled by Phil and his brother Dave’s guitar playing and the galloping bass lines from John Bazz, while Lee Allen and Steve Berlin’s saxophone playing adds to the celebratory mood. The Blasters tapped into a vintage rock-a-billy sound, but they also weren’t far removed from the cowpunk of Slash label mates Rank And File.

The B-side, “Border Radio,” offers a more heartbreaking portrait of a troubled relationship, as a woman longs for the man who deserted her and their son. She dedicates a song to him, hoping he’ll hear it via the “50,000 watts out of Mexico” and be inspired to return. Phil Alvin’s vocals convey the woman’s loneliness, and Gene Taylor adds an Americana flavor to the melodic arrangement with some boogie woogie piano playing.