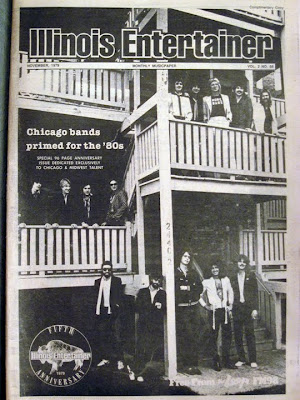 Believe it or not, there was a time when I didn’t write for the Illinois Entertainer. This issue came out in November, 1979, a good eight years before I joined the staff. Along with editor Guy Arnston, some of the regular contributors back then included Cary Baker, Linda Cain, Bill Dahl, Wayne Jancik, Clarke Krueger, Jeff Lind, Paul Natkin, Bill Paige, D. Shigley, and Bill Sosin.

The paper, published and founded by Kenneth L. Voss, was celebrating its fifth anniversary with a turn-of-the-decade feature called “Chicago Bands Primed For The ‘80s.” The cover featured Sosin’s shot of Survivor, Pezband, and Hounds on different levels of a north side apartment building’s back stairwell. The issue included profiles of those three bands, as well as Shoes, Styx, and Yipes.

Some of the more prominent ads in this issue were for The Granada Theatre; The Bee Gees’ Greatest and The Police’s Reggatta De Blanc albums; The Loop and WXRT; record stores like Wax Trax, Rainbow, Laury’s, Swollen Head, Burbank, Dog Ear; Uncle Albert’s, and Rolling Stone; bands like Brief Encounter, Europe, Off Broadway, Risk!, Scraps, Star Trooper, and Trillion; and clubs like B’Ginnings, The Edgewater, The Rock Garden, Knight Moves, Minstrel’s Alley, Pips, The Thirsty Whale, Studio One, and Haymakers.

On a related note, there will be a Haymakers Reunion in a little over a week from now, on February 26th, at Durty Nellie’s in Palatine. There will be live performances by the previously mentioned Bitch, Dreamer, Hounds, Madfox, and Tantrum, as well as the Pezband Allstars, One Arm Bandit (which includes guitarist Hoppy Niles, who was in Pin-Ups), and Jimmy Sohns from Shadows of Knight.

If it was possible, I would give everyone who attended the reunion a copy of the November, 1979 Illinois Entertainer, because it captures that era of Chicago’s music scene so well. Fortunately, organizers, Maureen Welch Bonifazi, Guy Arnston, Kathy Powers-Hall, Christine Trinity, and Chuck Fieldman, plan to have photographs and videos to help recapture those rock and roll moments. And of course, there will be the bands.