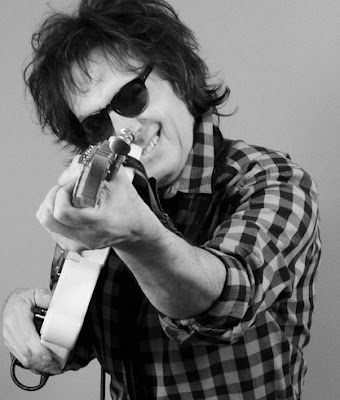 Singer-guitarist Mimi Betinis will be bringing his band to the Haymakers Reunion at Durty Nellie's this Sunday. Former fellow Pezband member Mike Gorman will be joining him for a few songs. Hopefully, Betinis will also play songs from his impressive 2010 CD, All That Glitters. Photo from the Mimi Betinis Facebook page.

Here’s a birthday toast to George Harrison, who would have turned 69 tomorrow. WXRT in Chicago is getting a jump on the celebration by designating him as their Friday Featured Artist. The station will be playing his songs with The Beatles, as well as songs from his extensive solo career, throughout the day. Terri Hemmert will also honor George on this Sunday’s edition of her weekly program, Breakfast With The Beatles, from 8:00 to 10:00 AM. Non-Chicago residents can stream WXRT via the station’s website.

The Jokes4Miles event returns to Leona’s restaurants in the Chicago area tomorrow night. Drop by the location nearest you from 5:00 to 11:00 PM and you’ll find a friendly camera person ready to record your joke for Miles Austrevich. I’ll be helping out at the Des Plaines location.

Miles is currently receiving treatments for brain cancer and gets an emotional boost from the jokes he receives from celebrities and everyday people. His father, stand-up comedian Len Austrevich, hopes to collect 5,000 videos. There’s also a documentary in the works, and Len is accepting donations via the IndieGoGo funding site to help cover the cost of production.

1980s garage rockers, The Del Fuegos have reunited, and will be performing at Lincoln Hall, at 2424 N. Lincoln Avenue in Chicago tomorrow night. The band’s debut, Longest Day, offered some classic examples of the genre, including the title track,“Nervous And Shakey,” “Backseat Nothing,” and “Mary Don’t Change.” Back in the day, I used to love combining Del Fuegos and Plimsouls songs on my mixed cassettes. As I mentioned in last week’s Slumgullion, Alive Natural Sound Records just released Beach Town Confidential, which captures The Plimsouls performing songs like “Shakey City” (a perfect segue from “Nervous And Shakey”), “Magic Touch,” and “A Million Miles Away” at the Golden Bear club in 1983.

Chicago may have the G8 Summit coming up in May, but here in my sleepy suburb of Palatine, we have the Haymakers Reunion. Eight acts and hopefully a lot of former regulars of the rock club (362 according to the reunion’s Facebook page) will be coming to Durty Nellie's this Sunday for an event that runs from 2:00 until 11:30 PM. The lineup includes Bitch, Dreamer, Hounds, Madfox, One-Arm Bandit, Pezband Allstars (including original members Mimi Betinis and Mike Gorman), Tantrum, and former Shadows Of Knight lead vocalist, Jimmy Sohns.

I never made it out to Haymakers, but I’ve written about most of the bands at one time or another, so I’ve got my ticket. Plus, Durty Nellie’s is only a five-minute walk from my house. A note to anyone thinking about taking public transportation to the reunion: the Metra Northwest line pretty much stops at Durty Nellie’s doorstep. Catch the 12:30 train from Chicago’s Ogilvie Transportation Center at 12:30 PM and you’ll arrive in Palatine at 1:24 PM. From that point on, trains run to Palatine every two hours through 8:30 PM. Keep in mind though for your ride back, the last Metra train stops in Palatine at 9:25. Miss that one, and you may have a long walk home. Earlier trains leave Palatine at 7:25, 5:25, and 3:25.

Local singer-songwriter Briar Rabbit (AKA Phillip Michael Scales) will be celebrating the digital release of The Great Routine as part of the 4th Annual Windy City Winter Ball tomorrow night (February 25th) at Subterranean. Pet Lions, Brighton, MA, and Ben Keeler are also on the bill. The event starts at 8:00 PM and admission is $10.

Briar Rabbit has been releasing a free download each week in February as part of Black History Month. The Great Routine is a thought-provoking four-song concept album about black actors in black face performing funny but racist comedy bits in the late 1800s and early 1900s.

The Britannicas, three power pop musicians who record songs together despite each of them being on a different continent, are working on a new EP. In keeping with that international/indie vibe, the new songs from Swedish guitarist-vocalist Magnus Karlsson, American bassist-vocalist Herb Eimerman, and Australian drummer-vocalist Joe Algeri are being previewed on radio stations around the world and can be streamed on the web. Updates and details are being posted on the trio’s Facebook page.

Don’t be surprised if you see the people at Mary-Arrchie doing the Church Lady’s superior dance these days. The theatre has been selling out shows during its current production of the Tracy Letts play, Superior Donuts. Artistic Director Cotovsky is reprising the role of donut shop owner Arthur Przybyszewski, which he played when Superior Donuts was being staged in 2010 at the Studio Theatre in Washington. D.C. The Mary-Arrchie version runs through March 25th.