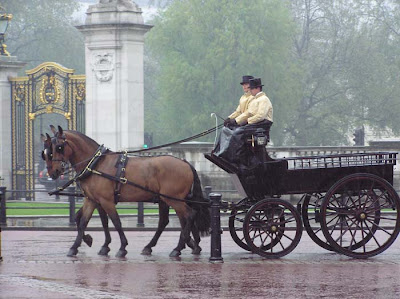 Thanks for taking time out from your Prince William and Kate Middleton merry festivities to check out my blog today. The picture above was taken by my wife Pam during our 2006 swing through Europe in honor of our 10th wedding anniversary. May the Royal Couple experience as much joy as Pam and I have during the past 15 years.

Speaking of anniversaries, Tributosaurus will be celebrating its 10th with a sort of year-long greatest hits series. The band, known for its rotating ensemble of musicians and ability to sound identical to artists from The Beatles to Michael Jackson, will be performing 12 of its best shows. There will be one each month, starting with a tribute to Bruce Springsteen in August. Other bands who’ll be honored include Jackson, Queen (the band, not Elizabeth), Pink Floyd, Elton John, and Stevie Wonder. Ten of the gigs are scheduled at Tributosaurus’s usual haunt, Martyrs’, and two will be at the Vic Theatre.

Maple Mars is heading to England, but not as guests of the Royal Newlyweds. The California-based power pop band, led by singer-guitarist Rick Hromadka, will be promoting its latest CD, Galaxyland in a series of U.K. gigs that includes London on May 19th, Liverpool May 23rd, and Edinburgh on May 26th. Drop in on these psychedelic sounding Yanks and tell them Broken Hearted Toy sent you.

Actress Lis Sladen wasn’t royalty, but as Sarah Jane Smith, she was one of the long-running British TV series Doctor Who’s most popular characters. She was a regular cast member from 1973 to 1976, but came back for guest appearances, and also starred in a successful spinoff, the more kid-friendly Sarah Jane Adventures. Sadly, she died of cancer on April 19th. One of my favorite Doctor Who moments since the series returned in 2005 was when the 10th incarnation of The Doctor, played by David Tennant, saw Sarah Jane for the first time in quite a while. His wide, joyous grin, reminiscent of Tom Baker’s portrayal of The Doctor, said so much about the deep emotion he felt for her. The fifteen-minute My Sarah Jane: A Tribute To Elisabeth Sladen recently aired on the BBC, featuring commentary from Tennant, current Doctor Who star Matt Smith, and other cast members.

Rainbow Connection. Singer-songwriter Amy Kuney has created a cautionary video for her song, “Gasoline Rainbows,” which deals with the 2010 Gulf Of Mexico oil spill. The song is from the compilation album of the same name, which was put together by One Tree Hill cast members Sophia Bush and Austin Nichols.

Who’s That Girl? Falling for a mysterious stranger has long been a part of popular culture, as evidenced by the Curt character so comically brought to life by Richard Dreyfuss in American Graffiti. His obsession with the T-bird driving blond played by Suzanne Somers works because it’s so believable. Some guys even swoon for women on TV commercials, which is where the Who Is That Hot Ad Girl? Facebook page comes in. Covered in today’s edition of the Thrillist online newsletter, this helpful site gives the lowdown on actresses who appear in TV ads.

As someone who had a serious crush on the perky brunette Dodge Girl back in the late 1960s, and later on the helpful and beautiful American Express operator in the mid-1980s, I can certainly relate to Who Is That Hot Ad Girl? Check out the site’s Facebook page today for a funny and apparently rarely seen T-Mobile parody of the Royal Wedding.

How To Be A Groovy Guy. The Lost At E Minor online arts newsletter featured an item today from the adult-oriented Viceland blog about a rocking alternative to the dreary custom of funerals. If you have the departed’s remains cremated, the And Vinyly company will press the ashes into a vinyl record that can be played on any stereo. I’m not sure what you’d hear if you played the record backwards, and there was no mention of this service on Record Store Day.

Double Dose Of Dean. Author and musician Dean Milano plans on combining his talents next week. He’ll be singing original tunes and signing copies his book, Chicago Music Scene: 1960s and 1970s at 2:00 PM on Thursday at Mather’s Cafe at 3235 N. Central in Chicago, and on Saturday at the Lisle French Market in downtown Lisle.

Rocking In Palatine. And finally, out in Palatine, where Pam and I are often considered the village’s Royal Couple, the summer schedule of outdoor concerts has been announced. Downtown Palatine Street Fest will take place on the weekend of August 26th through 28th. So far, there’s no word on which bands will be performing, but considering The Smithereens and The Bad Examples were involved last year, I have my hopes up. Also, the Sounds Of Summer concerts will be held on Wednesdays and Fridays from the middle of June through the first week of August at the Fred P. Hall Amphitheater. Of particular interest is the July 8th performance by the always entertaining retro rock trio, The Neverly Brothers.