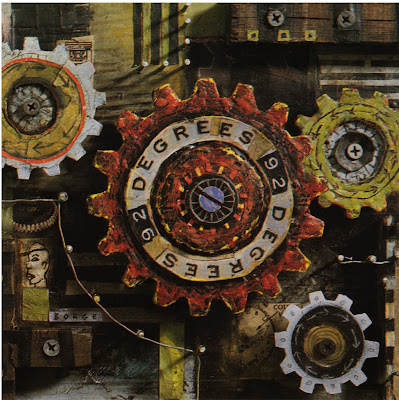 Each year, when International Pop Overthrow makes its ten-day visit to Chicago, I’m tempted to check out every one of its showcases. The mixed lineup of longtime favorites and previously unfamiliar acts yesterday afternoon at The Abbey Pub was a perfect example of why I feel that way. Certain bands never let me down, while others prove to be a pleasant surprise.

As usual, the crowd for this afternoon IPO gig was noticeably smaller than the after-dark affairs, but there was a friendly vibe as musicians brought along their families. Kids are less inhibited than adults about dancing, and sometimes, they even make good roadies. Most of the bands hung out before and after their sets; providing moral support for the other acts.

While watching 92 Degrees, I had a nagging fear that I had given a wrong impression of them in my previous day’s post, in which I noted that they haven’t released a CD since 1995 and rarely perform out more than once a year. That may be true, but singer-guitarist Steve Steffens, bassist-vocalist Mike Galassini, and drummer Dane Svoboda are hardly relics. They brought an infectious energy to power pop songs like “Money Makes My World Go ‘Round” and “Have You Ever Had Love?” from their recording days, and unveiled some beguiling new tunes like “Melody.” Afterward, the band members told me they were confident they would be releasing a new CD or EP in the near future.

The Abbeys, comprised of Mike Cohen and Jeff Janulis on acoustic guitars and vocals, had a couple of new songs up their sleeves as well. The duo first came together years back, at the suggestion of Graham Elvis of the Elvis Brothers. The Abbeys create spare but melodic arrangements, that combined with their perfect harmonies, hark back to the earliest days of rock and roll. The most obvious comparison is to The Everly Brothers, so it seemed perfectly logical when Cohen and Janulis told me that they’ve been invited down to Atlanta for a recording session to be produced by Edan Everly, son of the legendary Don Everly. In addition to their own material, The Abbeys impressed with a cover of singer-songwriter Sam Phillips’ “I Need Love.”

The Oohs drew from their three CDs during a high-energy performance that emphasized harmony vocals and strong melodies on tunes like “That’s What She Said” and “One Step Closer.” Continuing the afternoon’s trend of introducing new material, they performed three songs they’ve come up with since their last CD, Llamalamp, came out in 2006. Like 92 Degrees and The Abbeys, The Oohs are long time veterans of IPO - Chicago, although amazingly, I had never seen them before. They finished with a spot on rendition of Electric Light Orchestra’s “It’s A Living Thing,” which was dedicated, tongue in cheek, to IPO founder David Bash, who had compared them to ELO in his program notes.

Kerry Tucker, the mysterious artist I had not been able to find via my Internet searches the night before, turned out to be a former member of Einstein’s Sister, a Moline, Illinois band that had recorded three CDs and played IPO - Chicago in the past. Playing only his second gig with his new band, Tucker opened with a slow tune that had me scratching my head about Bash comparing him to Squeeze. The singer-guitarist cut loose with more energetic rock as he went along though, bringing a strong voice to melodic songs with a Midwestern style of Americana. His solo debut comes out this summer.

Aaron Fox & The Reliables played their first IPO gig in 2010, using the occasion as a CD release party for the highly-polished Late Too Soon. Songs from that debut effort sounded even better live Sunday afternoon, thanks to singer-guitarist Fox’s powerhouse vocals and guitarist-vocalist Mike Burns’ ferocious strumming. Fox, Burns, and bassist-vocalist Bob Vodick frequently created airtight harmonies, and closed their set with a pair of promising new songs. Just when it looked like the afternoon’s showcase had come to an end, IPO honcho Bash called an audible, asking Aaron Fox & The Reliables for one more song. The group responded with a sterling cover of The Cars’ “Just What I Needed.”

Daemon Familiar sounds more like the name of a Uriah Heap tribute band, but the trio plays a spare type of rock on satiric songs like “Barnyard” and “Oprah” that’s closer to punk.

The Desperate Club is also a local trio that matches biting lyrics to catchy arrangements, along with some fun harmonies on songs like “The Kids Are NOT All Right.”

The Turnstyles are a power pop band that claims Elvis Costello and Crowded House as influences. Their performance tomorrow night should sound a lot like their latest CD, Live In The Studio, since the recording was done with little overdubbing.

The rowdy Devon Kay & The Solutions mix rap, alt-rock, acoustic guitars, and adventurous vocals in funny songs like “The Pessimist” and “For Julia.”

The Treeshakers bill themselves as Massive Power Pop, and build songs like “Recognition” and “Let’s Hold On!” with raw vocals and ringing guitars.

The quartet Go Time plays a harder-edged style of power pop on its latest CD, Hit It, which I recently reviewed on this blog. I noted that, “The band never loses track of the melody while charging through songs like 'Sudden Death' and 'Wilmette,'" and added that Go Time has pretty much staked out its own territory.

Thanks for mentioning us!