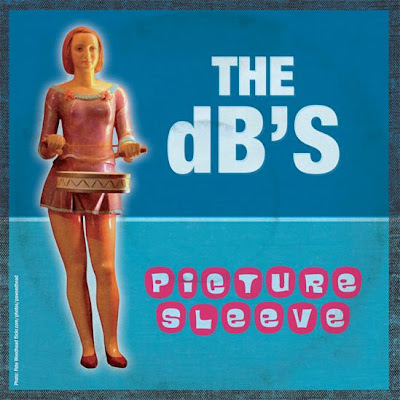 The dB’s are looking to release their long-awaited new CD in early 2012, and will be performing a few songs on April 16th at the Criminal Records store in Atlanta. The band’s double 45 record, “Picture Sleeve”/“Write Back” is among the many vinyl treasures being offered as part of Record Store Day festivities.

Ohio-based alt rock/country band Over The Rhine is back in town for a show tonight at Lincoln Hall. Led by Karin Bergquist and Linford Detweiler, both of whom play various instruments and sing, Over The Rhine has released several critically-acclaimed CDs since forming two decades ago. Their latest, The Long Surrender, which was pretty much recorded live within five days last year in California, is likely to continue that tradition. I had the pleasure of interviewing Bergquist and Detweiler for the Illinois Entertainer around the time their stark and beautiful Patience CD came out in 1992, and saw Over The Rhine perform at a Chicago street fest in 2009. Lucy Wainwright Roche, Over The Rhine’s opening act tonight at Lincoln Hall, recently released her debut CD, Lucy. She’s the daughter of Loudon Wainwright and Suzzy Roche of The Roches. The show starts at 8:00 PM.

Wonderwall Music Shoppe & Emporium is well known to Beatles fans in the Chicago area, and is using a mop-top motif for an event to help aid Japan’s earthquake and tsunami victims. Help! Japan Fundraiser, organized by Wonderwall co-owner GiGi Wong-Monaco, will run from 6:00 to 9:00 PM next Thursday, April 14th at the store’s location in Oak Park. WXRT radio personality and Breakfast With The Beatles host Terri Hemmert will serve as the MC, and performers include Brit Beat, Eric Howell, Jay Goeppner, Phil Angotti, The Harrison Street Ukulele Players, and Sandalwood Sitar Music Ensemble. Admission is $40 per person in advance, $45 at the door.

Fountains Of Wayne have posted on Facebook that they’ll be releasing details on their new CD in the near future.

This Sunday night brings Part 2 of Bruce Springsteen’s visit with his longtime band member Little Steven in the Underground Garage. The syndicated radio show airs on from 9:00 to 11:00 PM on WXRT in Chicago, and people around the globe can hear a live stream via the station’s website.

The Cars are releasing Move Like This, their first CD of new material in ages, on May 10th, and they’ll be in Chicago about a week later to perform at The Riviera Theatre.

The Minnesota-based group Matt Dodge & The Lobsters have already proven that power pop is alive and well among the younger generation of musicians, and now Atlanta trio The Head offers more evidence. The energetic songs from the band’s latest release, Hang On, are built on strong melodies and harmony vocals.

Expo ‘76, one of singer-guitarist Dag Juhlin’s multitude of bands, will be returning to Simon’s Tavern on Clark Street in Chicago for another evening of entertaining and eclectic cover versions on April 13th.

Orgie Theatre Award, a group formed to “encourage original innovative risky thrilling inspiring overlooked offbeat or even outlandish work in Chicago,” is sponsoring a ceremony to celebrate past and current Award winners at The Spot on April 19th. Seth and Kellen will serves as official hosts, and the email invitation notes, “All theatre freaks and friends are welcome.” Doors open at 8:00 PM. The Spot is located at 4437 N. Broadway.

The Chirp Record Fair is being held tomorrow and Sunday from 10:00 AM to 5:00 PM at Chicago Journeymen Plumbers, at 1340 W. Washington Boulevard in Chicago. In addition to offering a wide assortment of CDs, vinyl, cassettes, original art, and posters for sale, the fair will also present entertainment throughout both days. Admission is $7, or $5 with any ad that mentions the Chirp Record Fair.

The new season of Doctor Who is garnering some heavy-duty, movie type promotion in the United States in preparation for its arrival via BBC America on April 23rd. Earlier today, cast members Matt Smith, who plays the current incarnation of The Doctor, along with Karen Gillan and Arthur Darville, who play his companions, appeared at the Barnes & Noble on Fifth Avenue in New York, to sign copies of the Doctor Who Complete Fifth Series DVD. Chris Hardwick of The Nerdist blogsite will host a premiere screening at the Village East Cinema in New York from 7:00 to 10:00 PM on the 11th. The show’s Matt Smith, Karen Gillan, Arthur Darville, Alex Kingston and Steven Moffat will also be on hand. The Red Eye newspaper is reporting today that its Show Patrol TV columnist Curt Wagner will host a premiere in Chicago on April 20th at the Landmark Century Centre Cinema, at 2828 N. Clark in Chicago. Those interested in attending must RSVP at the Show Patrol website.

Index: Doctor Who, Over The Rhine, The dB's

Thanks for reminding me about the db's!!