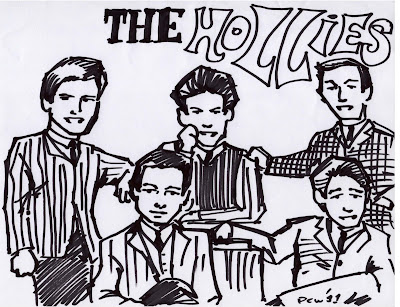 After having a quick lunch back at home, I took the Metra into downtown Chicago, where I planned to catch the Blue Line to the Damen stop. Having already checked out Top 5 Records in Palatine, my next Record Store Day destination was the Reckless Records on Milwaukee Avenue. There would be live entertainment, including a set by the new super group Candy Golde. But since I still wanted to find The dB’s “Picture Sleeve” 45, I decided to make a side trip to the Reckless Records on Madison, in the heart of downtown. Even though the store was smaller than the Milwaukee Avenue location, I figured they would be much less busy.

“Actually, that we do have,” a clerk at the downtown Reckless said, in response to my dB’s inquiry. They were out of the R.E.M. singles box set though, and based on what I overheard from customers, most of the other rarities were already gone too. With my dB’s quest completed, I headed off toward Milwaukee Avenue, to soak up some more Record Store Day ambience.

A large crowd had gathered at the back of the store to watch a live performance by the indie rock band Joan Of Arc, but there were also plenty of people sifting through bins of CDs and vinyl. A friendly crew of employees hustled behind the long counter, fielding questions, retrieving merchandise, and handing out promo items. I requested a copy of the free various artists cassette, Reckless Records “Lifers” Vol. One, and a staffer gladly provided it. The tape includes “The Felled Wych Elm” by Chris Connelly, “Amoeba Amore” by The Dials, “I Own A Lot Of Soul Records” by Bride Of Wolf Destroyer,” and 11 other songs.

Just inside the doorway, the popular comic artist known as Plastic Crimewave was drawing rock band caricatures with a black marker for five bucks. I had heard an artist would be doing this, and planned on bringing a Hollies CD jacket to be done, but forgot all about it. When I saw the artist was Plastic Crimewave, who does the syndicated strip Secret History of Chicago Music for The Reader newspaper, I was doubly disappointed that I hadn’t brought a Hollies pic along.

I searched through the bins, but the only Hollies release I could find at Reckless was a vinyl copy of the very early Hear! Here! album. I would have preferred something from the band’s psychedelic era, but Plastic Crimewave did a nice job with the material he had to work with. Pointing to Tony Hicks in the midst of the Hollies caricature, the artist described him as one of rock’s most underrated guitarists.

Joan Of Arc finished its set, and gave way to singer-guitarist Nicholas Tremulis, a veteran of the Chicago music scene, and drummer Bun E. Carlos from Cheap Trick. The two are members of Candy Golde, which also includes John Stiratt of Wilco, and Rick Rizzo of Eleventh Dream Day. The band had made its live debut at SXSW earlier this year, but for the Record Store Day show, Tremulis and Carlos were the only members on hand. The duo played songs from the Candy Golde EP, which is being released in May, and plugged their upcoming gig at The Double Door.

After Tremulis and Carlos finished their set, I decided to head home. I may not have found all the records I had been searching for, but the day had been a success in so many other ways. Long live vinyl!