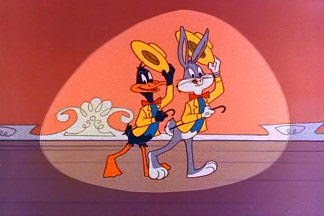 Mike Zelenko and Ted Ansani on their way to meet Phil Angotti at The Abbey.

Almost from the moment the 2011 International Pop Overthrow - Chicago schedule was announced, the bands slated for April 23rd were warning their friends on Facebook to buy tickets in advance. The reason for their concern was a Material re-Issue gig, set right in the heart of the six-band showcase. Veteran singer-guitarist Phil Angotti, joined by original members bassist Ted Ansani and drummer Mike Zelenko, would be playing Material Issue’s legendary debut, International Pop Overthrow from start to finish.

As expected, the April 23rd evening lineup at The Abbey Pub has sold out. But here’s some advice for anyone who does have tickets: Arrive early enough to see the bands performing before Material re-Issue, and check out the bands coming on afterward. One of the true joys of International Pop Overthrow the festival is the variety of talent Bash brings together for his showcases.

Singer/multi-instrumentalist Richard Neil Miller is by no means fragile in his Waiflike project, which finds him performing energetic, British Invasion inspired songs like “Sober Now” and “Dime Store Daisy.” In addition to catchy power pop, Waiflike also dabbles in more acoustic material like “Running In Place.”

Former Enuff Z’nuff singer-axeman Johhny Monaco carried on the tradition of that industrial-strength power pop band with the songs on his 2007 solo debut, Overrated. “Still Haven’t Called” and “LetsSetOurHeartsSelfDestruct” combine layered vocals and strong melodies within energetic arrangements, while “I Like You More” has a White Stripes whimsical feel.

It’s common to find a lot of musicians hanging out at International Pop Overthrow, supporting each other’s gigs and catching up with old friends. The WXRT-sponsored Material re-Issue show has been getting loads of media attention, which should mean even more musicians at the Abbey Pub. In my recent review of the International Pop Overthrow 20th Anniversary Edition for the Illinois Entertainer, I described the album as proving “the staying power of lead vocalist-guitarist Jim Ellison’s songwriting ability, and the memorable songs he created with bassist Ted Ansani and drummer Mike Zelenko.” I also noted that, “Ellison pretty much concentrated on affairs of the heart, but approached the topic from various directions and filled his songs with believable characters whose emotions were readily recognizable.” Angotti will face a mammoth challenge in playing Ellison’s role onstage, but he’s a longtime friend of the band, as well as a gifted artist in his own right. It’s not likely anyone will come away from this show disappointed.

The Valley Downs, led by the husband wife team of singer Marianne Shimkus Galassini and bassist-vocalist Mike Galassini, have released two EPs of well-crafted indie rock. In my Broken Hearted Toy review of the band’s untitled second EP, I said, “the band continues to craft melodic songs that sound like tracks from a Bangles CD, or perhaps The Continental Drifters. There’s also a definite Beatles influence running through these four tracks.” The band has played several IPO gigs in Chicago and other cities.

The Velvet Cadillacs add a Warren Zevon type of dark humor to revved up songs like “Things I Plan To Do” and “Holiday Inn.” The guitars of CD Riviera and Karl Caprice Classic are always prominent, and Riviera’s raw vocals suit the frequently criminally-inclined lyrics.

While listening to the Van Go CD, The Long Lost Last Call in preparation for an upcoming BHT review, “Your Three Minutes Are Up” sounded strikingly familiar. Sure enough, that song had jumped out at me during a 2010 IPO Van Go performance. Led by vocalist-guitarist Dave Sippel, the band charged through a cover of Elvis Costello’s “Girl Talk,” as well as hard-hitting originals like “London Underground.”