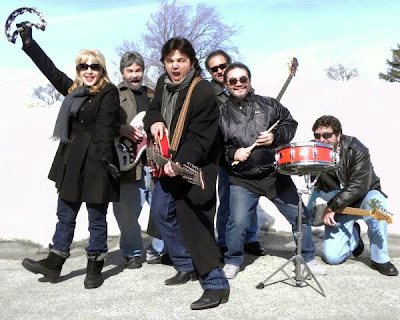 April in Chicago can be unseasonably chilly. Photo taken from The PondHawks MySpace page.

Saturday night’s rousing climax to International Pop Overthrow - Chicago 2011 is officially Sold Out. Fans can still check out an impressive lineup at tonight’s IPO at The Abbey Pub, and there’s an afternoon showcase at The Abbey tomorrow.

Don’t be surprised if the kids from Northbrook Garage go on an Easter egg hunt after their 1:00 PM performance on Saturday. Okay, they’re not that young, but these musicians are currently in 7th and 8th grade. Not that anyone would know that from listening to Elenna “LNA” Sindl’s husky vocals or her band mates’ professional playing. Northbrook Garage’s funky “Under The Hood” should have patrons at The Abbey smiling in amazement.

The four guys from The April Year look pretty young as well. Their highly polished songs, like “Meet Me Here” and “So Much For The Art Museum,” could land the band some heavy radio airplay.

The band Emerson takes an introspective approach to its original material, crafting romantic ballads like “Alright, Okay” and “Tonight.”

The bouncy, piano driven songs by the Minnesota-based The Golden Bubbles have a music hall feel that’s augmented by fun vocal interplay and shifting tempos.

Michigan native Jeremy has an IPO pedigree that goes well beyond Chicago. He taps into classic pop sensibilities on songs like “Pop Rules” and “Come Clean,” but don’t be surprised if he cuts loose with some impressive guitar jamming during his performance.

The PondHawks can cut loose with guitar-driven tunes with a modern edge like “Fire Eyes” and “Midnight Howl,” but also place a strong emphasis on harmony vocals. “Your Mind Is Hard To Find” features them working in a slower, more Beatlesque vein.