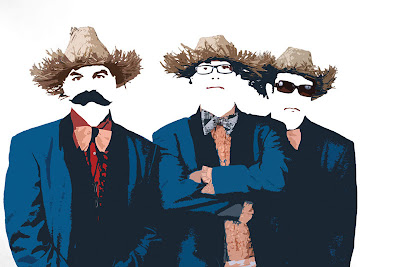 All three of these guys are schizophrenic. No, they’re not. Graphic from official New Duncan Imperials website.

Houston, Texas native Chase Hamblin is an eccentric performer who wryly describes his music as Melodramatic Popular Song on his MySpace page. He covers a lot of ground, from the samba beat of “Think Of The Good Times” to the pulsing garage rock of “Never Let You Go,” which could have been a hit for The Yardbirds.

Fronted by vocalist-guitarist Pamela Richardson, The Pralines offer a mix of melodic rock songs like “What To Do About You” and the more folk-rock oriented “Raphael.” The Pralines also tap into some appealing rock-a-billy with “Redeye to Loveland.” Their debut CD is titled Song Of The Day Cafe.

Tenniscourts features members of The Wes Hollywood Show, whose 2003 release Moonraker still stands as one of the best releases by a Chicago power pop band. Catchy songs with gorgeous harmonies like “Swimming Pool” by Tenniscourts carry on that tradition, and the band has just released a new CD titled Dig The New Sounds Of.

Wise guy trio New Duncan Imperials has a long history of performing high-speed, humorous songs like “I’m Schizophrenic (No I’m Not)” on the Chicago club scene. Also known for their outlandish outfits, New Duncan Imperials will have a wealth of CDs to draw from at their IPO - Chicago gig. Their latest release on the Pravda label is sort of a greatest hits package, titled The Singles Collection.

Considering they named their most recent CD Just Ad Nauseam, it’s not surprising to find Wiplot, the final act on tomorrow’s showcase, takes a fun attitude toward making music. A bit of a funk surfaces amidst the harmonies of “Sunshine Factory,” and the band experiments with a psychedelic arrangement on “Minus Mind.” The goofy “Lower Heights” adds another element to Wiplot’s approach.