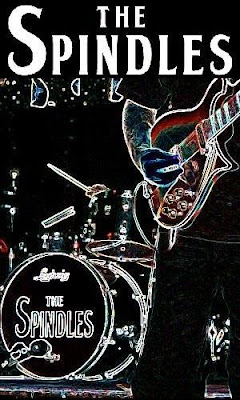 Had a great time at the afternoon version of International Pop Overthrow - Chicago today at The Abbey Pub. It was fun checking in with the festival’s founder and benevolent master of ceremonies, David Bash, as well as a number of musicians. I’m hoping to have a review of today’s showcase posted within the next few days. In the meantime, here’s a quick preview of the bands who'll be playing the IPO - Chicago showcase at Red Line Tap tomorrow night.

Personally, I have to like any band that faithfully covers The Hollies' “Look Through Any Window,” which is just one of the catchy pop songs on The Spindles MySpace page. “Prisoner Of War” is another example of the band’s way with harmony vocals and ringing guitars. As an added bonus, drummer Brad Elvis, of The Handcuffs, will be sitting in on two songs (one by The Elvis Brothers, one by The Who) with The Spindles tomorrow night.

The Romeo Flynns, who hail from The Motor City, continue their obsession with melodic songs that evoke the mid-1960s on their latest release, Masque Of Anarchy.

The Milwaukee-based Certain Stars has one member who’s a rabbit, if you go by the photo on their MySpace page. Songs like “You’re A Caution” and “Can U Dig It” take a fun garage rock approach with bratty vocals and hard guitars. They have a new EP titled Wired For Sound.

Milwaukee’s Elusive Parallelograms just might have the most intellectually inclined named of any band playing IPO - Chicago and list quantum physics as a major influence. Their imaginative tunes, such as “No Subject.wma” and “Oscillator” mix acoustic and electric guitars along with altered vocals amidst psychedelic arrangements.

The youngsters of The Break include bass player Paul Ansani (offspring of Material Issue bassist Ted Ansani) and will likely be playing the cutting edge songs from its latest CD, Welcome To Our Side.