A Double Shot Of IPO - Chicago: Part One 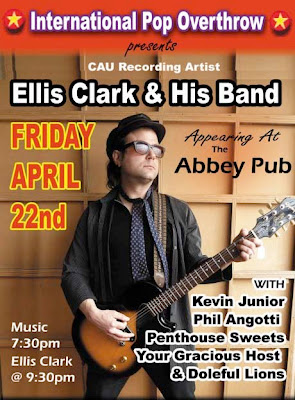 The Material re-Issue performance at The Abbey Pub on the final evening of International Pop Overthrow - Chicago 2011 definitely lived up to all the publicity that preceded it. The SRO crowd at The Abbey Pub roared with approval at the end of the opening number, “Valerie Loves Me,” blowing away any doubts that singer-guitarist Phil Angotti would be embraced for bringing the songs of Jim Ellison back to the stage again. Introducing the trio of Angotti and original members Ted Ansani and Mike Zelenko, International Pop Overthrow honcho David Bash had exuberantly proclaimed, “Jim Ellison, this one’s for you!”

About 24 hours earlier, Angotti had been part of an IPO - Chicago showcase at The Abbey that drew a much smaller crowd, but still underscored the sense of community this annual festival tends to foster. Friday night’s opening set was by guitarists Tom Curless and Brian Krumm of Your Gracious Host, who played tuneful indie rock songs like “Surrender Me” and “The Sunrise Nearly Killed Me.” Your Gracious Host’s newest CD, Sleepers Awaken, was available at the merchandise table.

Angotti came on next, performing the bulk of his latest solo effort, People And Places. Well-crafted songs like “Broken Baby Doll House,” “Same Ol’ We,” and “Whatever Happened To. . .” came off well in the live setting, and “My Old Records” featured a guest appearance by Brad Elvis on drums. Tommi Zender, who played drums throughout most of the set, also took a few turns on guitar, and provided harmony vocals. Kevin Junior, who was due up next, joined Angotti on harmony vocals while covering a vintage Kinks song. Keyboards player-vocalist Carolyn Engelmann was also impressive, and would become a familiar face throughout the night by performing on Kevin Junior and Ellis Clark’s sets as well. Angotti dedicated the touching “Parting For Awhile” to the late Carlos Hernandez Gomez, an acclaimed reporter as well as a Beatles fanatic.

Kevin Junior, best known for his symphonic pop music with the acclaimed Chicago band The Chamber Strings, performed a set of melodic songs from his Ruins CD, backed by Lou Hallwas of Penthouse Sweets on keyboards, Angotti on guitar, and Engelmann on keyboards and backup vocals. Junior and Angotti harmonized beautifully on several songs, and toward the end of the set, guest musicians Brad Elvis and Ellis Clark came on board. Junior announced that The Chamber Strings will be playing their first live gig in two years at The Hideout on May 19th.

Ellis Clark and Epicycle came on next, with Engelmann on keyboards, Charlie (sorry, I didn’t catch his last name) from Phil Angotti’s band on bass, and Brad Elvis on drums. As David Bash pointed out during his introduction, singer-guitarist-keyboards player Clark has explored numerous types of music throughout his career, always with wit and imagination. Friday night’s show included catchy songs like “Strange Days,” “Big Day,” and the satiric “I’m So Cool.” The set included new songs like “The Lucky Ones” and (I’m guessing on the title) “Hand Of Love.”

Brothers Jonathan and Robert Scott of Doleful Lions unleashed sheets of shimmering sound via their guitars and pre-recorded synth beats. Their songs, like the title track of their latest CD, Let’s Break Bobby Beausoleil Out Of Prison, recalled the UK shoegazer music of the 1990s.

Penthouse Sweets were minus bassist Eric Chial for their IPO - Chicago gig, and aside from the occasional odd comment like vocalist-guitarist Andy Hansen telling guitarist-vocalist Lou Hallwas, “You looked like Adolph Hitler for a minute there,” the musicians didn’t joke around as much as in past shows. Still, it’s always fun to take in the band’s freewheeling brand of melodic pop. New songs like “Dark Eyes” and a cover of The Who’s “Pictures Of Lily” were particularly strong, and Penthouse Sweets wrapped up the evening with a rollicking version of The Replacements’ “I.O.U.”

Members of Penthouse Sweets showed up at The Abbey Pub long before they were due to go on, and Curless and Krumm from Your Gracious Host hung out long after their opening set was over. It’s inspiring how much the bands involved with International Pop Overthrow support each other. Mike Galassini from 92 Degrees and The Valley Downs was also hanging out, as was Chloe F. Orwell, Brad Elvis’s partner in crime from The Handcuffs. Phil Angotti pretty much spent the entire evening at Friday’s showcase, and I had a chance to ask if he was nervous about the Material re-Issue gig coming on the following night. He said he felt a little nervous, but strongly believed he, Ansani, and Zelenko were ready.

Coming Up: A sold-out crowd finds Material re-Issue is ready.