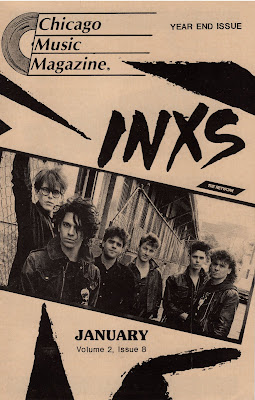 Listed as Volume 2, Number 8, this particular Chicago Music Magazine is from January, 1986. It was published by Mike Macharello, who also worked as a D.J., and primarily covered the Chicago dance/alternative club scene. There was a Gramaphone Records sponsored Dance Chart with Sheila E’s “Love Bizzarre” perched at the top, and included other tracks, like Deborah Harry’s “Feel The Spin,” Yoko Ono’s “Hell In Paradise,” Fine Young Cannibals’ “Johnny Come Home,” and Talking Heads’ “And She Was.” “We Built This City,” by Jefferson Starship, seemed out of place in this company, coming in at #35.

Record Exchange sponsored a Modern Dance Product Survey, which included The Cult, Ministry, Love & Rockets, Simple Minds, New Order, and Blancmange. That same page featured record reviews by Richard Pierson, including one of an import by Frank Chickens, whom he described as Hipponese female performance artists. Jeff Kapugi’s Record Reviews covered Paul Hardcastle, A-Ha, and Orchestral Manoeuvers; Sandi Justin gave four stars to A Chorus Line and Out Of Africa in Film Works; and on the Berlin sponsored Video Report, Dean Anderson praised the Sun City video by Artists United as, “A very moving political and social commentary,” although he incorrectly credited it to Stevie Ray Vaughn instead of Little Steven Van Zandt.

There was also The Rock Roster, which charted songs by ZZ Top, Stevie Nicks, and The Cars. Chicago Music Magazine had full-page ads from importes etc THE Chicago Dance Music Store, the Rolling Stones record stores in Chicago and Norridge, and of course, the Chicago Bears Shufflin’ Crew’s “The Super Bowl Shuffle,” which was available as a vinyl record and a video cassette.