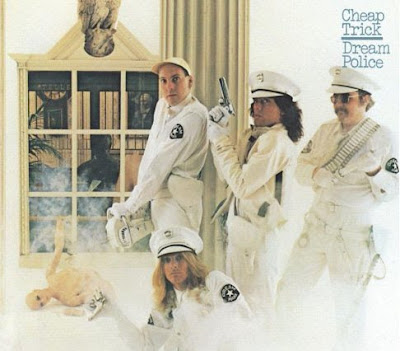 Would You Like To Go To Heaven For 12 Nights? Cheap Trick will be conjuring visions of nocturnal surveillance when they perform their entire Dream Police album accompanied by The Bombastic Symphonic Philharmonic with The Rhythmic Noise Mind Choir at The Northern Lights Theater in Milwaukee. I’ve never heard of these particular classical outfits but the names alone suggest they’ll be a good match for Robin and the boys. The exclusive engagement includes 12 dates scattered throughout January and February. The band will be playing other hits as well. Those of us who aren’t cheeseheads can catch Cheap Trick playing a halftime gig at the Colts/Jets playoff game tomorrow and on Conan O’Brien’s show on January 13th.

Go Now. Power pop band Go Time, who have a new CD called Speak, will likely be performing songs from it tomorrow night at The Horseshoe, 4115 N. Lincoln Avenue. Paul Coady, Mark Piecha, and Cari Ray & The Loaners are also on the bill. Show starts at 8:00 PM.

You Start To Cry And I Say Hello. Yesterday, I did a Facebook post suggesting someone should make a rock video featuring all the famous people who have been crying in public lately, set to “If You Don’t Stop Your Crying” by Big Hello. The song has a revved up arrangement with lead vocalist Chloe F. Brady belting out a threatening chorus of, “If you don’t stop your crying, I’m gonna give you something you can cry about.” Big Hello is no longer with us but Orwell and drummer Brad Elvis are very much active in The Handcuffs. Brad Elvis contacted me to say that his friend Dave Borucki just created a video based on my suggestion and posted it on YouTube. While I had envisioned a montage of weeping celebs and politicians, this clip concentrates on soggy scenes involving new Speaker Of The House John Boehner. Still, it’s nice to see someone appreciates my ideas.

Old Time Fun. Film accompanist/comedian/musician David Drazin now has his own YouTube site. Set up by his former Famous In The Future mate Frank Carr, the site offers 16 clips of Drazin performances. Drazin will be accompanying Robin Hood, starring Douglas Fairbanks on January 16th, and My Best Girl, starring Mary Pickford on February 6th, at the Wilmette Theatre in downtown Wilmette. Both shows are at 2:00 PM.

The Sons Also Rise. Hollus guitarist Michael Lux is bringing his side project The Bad Sons to the Bottom Lounge for a gig on January 28th. The group’s Neat Repeater EP was named #1 Release of 2010 by the Chicago Garage blogsite.

Happy Days Are Here Again. I caught Cliff Johnson and The Happy Jacks at The Abbey Pub last week and was impressed with the band’s energetic playing and Johnson’s ever-powerful vocals. He’s doing a mix of new and old material, some of it off his recently released Razors And Rose Petals CD, along with some pretty funny banter and schtick. Cliff Johnson and The Happy Jacks will be performing at the Nite Cap on West Irving Park Road in Chicago tomorrow night in Chicago. Show starts at 10:30.

Un Tour, S’il Vous Plait. Plastiscines, the four-woman garage rock band from Paris, recently posted on Facebook that they’re coming to Los Angeles in January. There’s no other info about it on their MySpace page or blog, but hopefully, this means they’ll be touring the US again.

They’d Rather Be Wrong. The Wrong Boys, a brand new copy band comprised of veterans of the Chicago rock scene, will be playing hits from the 1960s and later, in their Sopro sponsored debut at Bobby McGee’s in Crest Hill tomorrow night.

It’s The New Elevated Taking Over. “The grass has grown much taller now, overrunning everything. Oh, what have I done?” - “Crusader” by The Hollies. The Elevated Observations section of this blog had gone to pot lately with the only post being an outdated notice about an episode of my Manchester Gallery series on the Sunday Morning Coffee With Jeff internet show. Originally, the concept of Elevated Observations, which takes its name from a psychedelic Hollies tune, was to offer short bits about the entertainment scene. But I soon discovered that people who read this blog via an RSS feed never see that section. Thus, Slumgullion was born and Elevated Observations withered away. But now, it’s been redone with a series of links to my various creative pursuits, past and present. For example, you’ll learn that my wife Pam wrote a skit about me being a roving reporter for the new season of Sunday Morning Coffee With Jeff, and that I’m now writing for the online Chicago Art Magazine and its assorted sibling publications.