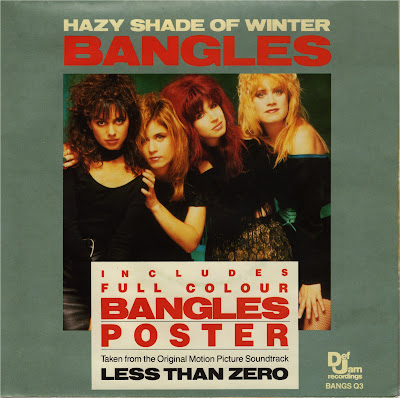 I saw a Facebook post today noting that it’s Vicki Peterson’s birthday. So, in honor of the Bangles’ vocalist-guitarist, here’s a look back at the 1987 British import of the hit single, “Hazy Shade Of Winter.” It came enclosed in a plastic bag, and the 45 jacket, when unfolded, became a two-sided poster.

The song itself opens with some space age keyboard action and angelic harmonies, right before the guitars and drums kick in. It’s a more muscular version than the Simon & Garfunkel original; much like the way The Lemonheads offered a pumped-up take on “Mrs. Robinson.” Listening to it, I’m reminded of a telephone interview I did with Debbi Peterson for the Illinois Entertainer in 1979. Agreeing that “Hazy Shade Of Winter” had a harder edge than people were used to from The Bangles, the drummer noted, “Playing live will provide an opportunity to show our stuff,” and jokingly added, “Because we can kick gnarly butt.” In the Christmas 2010 issue of Record Collector, Susanna Hoffs told writer Paul Lester that she was enamored with “Hazy Shade Of Winter” from the first time she heard it, over five years before The Bangles recorded it.

The B-Side finds Joan Jett & The Blackhearts covering “She’s Lost You,” which was originally done by the English mod band The Zephyrs back in mid-1960s. Jett’s version sports a fun and slinky arrangement, including some good-time piano playing along with bursts of electric guitar. Like “Hazy Shade Of Winter,” “She’s Lost You” was on the soundtrack for the rich kids gone bonkers flick, Less Than Zero.