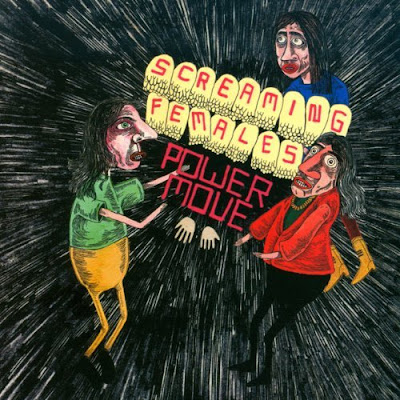 Note: This review originally appeared in the Illinois Entertainer. The band is in Chicago tonight for a show at Lincoln Hall, along with Mister Heavenly, Title Tracks, and The Dig, as part of the Tomorrow Never Knows festival.

Singer-guitarist Marissa Paternoster is the only woman in Screaming Females, but does her best to live up to the New Jersey trio’s name. Paternoster does more than howl, she’s a charismatic performer in the tradition of Bjork, Siouxsie Sioux, and Metric’s Emily Haines. Unfortunately, the muddy, low-fi production on Screaming Females’ latest effort often blunts her firepower.

The band has other problems throughout the first half of Power Move, like getting bogged down in the generic heavy metal stomp of “Skull” and straining to sound avant garde on “Starving Dog.” On the fast-paced “Lights Out,” Screaming Females finally emerge from the muck and keep rocking for the remainder of the CD. An energetic guitarist as well as singer, Paternoster sparks the band’s instrumental passages on the hard-edged “Adult Army” and “Halfway Down.” “Buried In The Nude” in particular achieves the fascinating mayhem that Screaming Females aimed for but missed earlier on Power Move.