Up To His Neck In Classical Rock 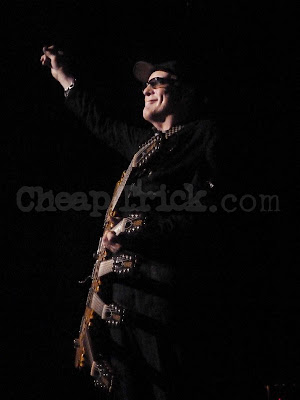 Cheap Trick guitarist Rick Nielsen dropped by the WXRT studio this morning to have a quick chat with morning man Lin Brehmer about a series of concerts that kicks off tomorrow night at The Northern Lights Theater at Potawatomi Bingo Casino in Milwaukee, Wisconsin. Cheap Trick will be performing the entire Dream Police album, backed by The Bombastic Symphonic Philharmonic with The Rhythmic Noise Mind Choir throughout January and February. Six back-up singers and a 20-piece orchestra will be involved. The concerts will feature the band’s other hits as well.

“We do that as one section of stuff,” Nielsen said, referring to Dream Police. When Brehmer noted that it would be particularly interesting to hear the title track, with all its dramatic instrumentation, backed by an orchestra, Nielson agreed, saying, “The intensity of that is cool.” He added that the Northern Lights people had come up with the idea after having seen one of the Beatles-themed shows Cheap Trick performed during an extended stint in Las Vegas.

Brehmer has a long association with Cheap Trick; his guest appearance as the hyper AM radio DJ during a live performance of “On The Radio” at The Metro can be heard on the On XRT Volume 4 CD, released in 1998. So this morning’s interview naturally included some joking around, such as Nielsen saying that he had chewed out one of the orchestra members during a rehearsal. When Brehmer asked if anyone in the orchestra had a five-neck violin, Nielsen insisted that he actually owns one. It would be interesting to see him playing it at the Dream Police concert, but I’m still not convinced Nielsen was serious. He also teased that Brehmer sounded like Kevin from The Office when he described Cheap Trick’s The Latest CD as, “Nice!”

There was one burning question that went unanswered during the interview: Why isn’t Cheap Trick doing this type of show in Chicago?