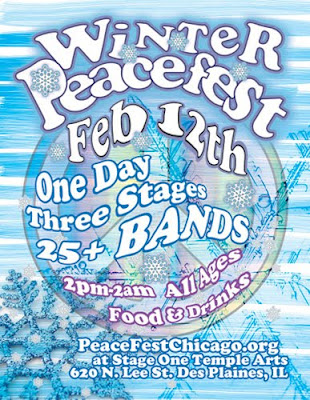 Everyone Ride On The Peace Train. To Des Plaines. Todd Wessell reports in the current issue of Palatine Journal & Topics that over 25 local bands have signed on to perform at the Winter Peace Fest being held at Masonic Temple on February 12th in Des Plaines. Promoter Jim Patton has staged Peace Fests around these parts in the past, but this is his first attempt at an indoor version. He’s expecting thousands of people to show up to see bands like Flabby Hoffman, Genral Patton and His Privates, and Phillip Morris. There will also be DJ’s and plenty of vendors on hand. Admission is $10 and tickets are now on sale at the official Peace Fest website.

The Fool In The Hall. Warpaint, the four woman band whose mesmerizing The Fool was named one of the best CDs of 2010 by several of critics, is coming back to Chicago as part of a XRT Big Beat Show at Lincoln Hall. Tickets for the March 24th show, which also includes PVT and Family Band, went on sale earlier today.

He’s Not Here To Start No Trouble. Guitar slinger Joe Jammer has always been a guy who loves to mix sports with rock and roll, so it’s no surprise he’s come up with a musical tribute to the Chicago Bears and their quest for the NFC Championship. Fresh from a three-month tour in England, he’ll be backed by The Roulettes at a SOPRO sponsored Special Bears Rally from noon to 3:30 PM on Saturday, January 22nd at the Blue Chip Casino in Indiana.

And Your Bird Can Sing. The Abbey Pub on Chicago’s northwest side will sponsor a Chick Singer Night on Monday, February 7th. The show will be hosted by Ellen Winters, and feature the artists Sandra Van Laningham, Nicole Neff, Kailey Rockwell, LaShera Moore, and Claire Corriveau. Admission is $10 at the door. Show starts at 7:30 PM.

The Perfect Event For A Winter Night. James Moeller and Carla Hayden of the indie band WhiteWolfSonicPrincess will be presenting Honey, Gimme The Covers! on Saturday, January 22nd at the Celebrity Salon in Evanston. Billed as The Best Cover Songs Ever Performed, the party will feature acts like The Telepaths, Mr. Mo, Bonnie Rhodes, Peter Demuth, and Jan King & Medicine Ball playing songs by Pink Floyd, Bob Dylan, Neil Young, The Beatles, Black Sabbath, Sam The Sham & The Pharoahs, Tom Petty, and other well-known artists. Moeller and Hayden will do some solo stuff, and Famous In The Future groupies should know that Frank Carr, Desiree Burcum, Tina Teske, and David Drazin of the comedy group will be performing under the nom de plume of The Rut. Showtime is 6:30 PM. The Celebrity Salon is located at 1041 Chicago Avenue, #8 in Evanston. The event is free and BYOB.

Catch This. Steve Dawson of the alt rock/country band Dolly Varden will be sharing the bill with Americana/folk artist Melanie Budd at The Hideout next Friday, January 28th.The show starts at 10:00 PM.

Lil’ Lilith. Sarah McLachlan brought her reactivated Lilith Fair to the Chicago area last summer, and she’s coming back for a more intimate gig dubbed Sarah McLachlan And Friends at the Chicago Theater on March 12th. The show will feature the singer being backed by Melissa McClelland and Butterfly Boucher while playing old favorites and off her latest CD, Laws Of Illusion. McClelland and Boucher will also get their turns in the spotlight. McLachlan will also take questions from the audience throughout the concert.

Hooray For Me! By the way, this is my 400th post for Broken Hearted Toy.