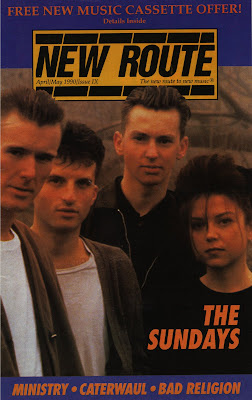 New Route had already been around for at least two years by the time I picked up this April/May issue in 1990. I’m basing that on Editor-in-Chief Douglas Joseph’s column, in which he makes a reference to New Route doing a cover story on Living Colour “two springs ago.” The reason for the Living Colour flashback was a two-page spread of photographs taken by the band’s leader, Vernon Reid in this issue. Reid’s compelling color pics of urban blight justify the editor’s description of them as, “another dimension to an extraordinary artist.”

New Route, which sported the copyrighted slogan, “The new route to new music” on its front cover, was based in New York. The publishing company also produced a radio program called Bug Music, which at some point featured Reid as a guest host. Jon Fox and Peter Shershin served as the magazine’s Music Editors, and Marlene Goldman was the Associate Editor. It appears that there was a regular staff of writers that included Anne Heller, whose profile on Flat Duo Jets appeared in this issue, as well as Darren Ressler, who penned The Sundays cover story. Other pieces, like the one on Ministry by Michael Deeds, and the one by Matt C. King on The Cult., were contributed by college students.

This issue of New Route also covered Gin Blossoms, Luka Bloom. Lloyd Cole, The Chills, and Eleventh Dream Day. All in all, not a bad batch of bands to feature. The Record Reviews section included Robyn Hitchcock’s Eye; Love With The Proper Stranger by the four-woman band The Aquanettas; Poi Dog Pondering’s Wishing Like A Mountain and Thinking Like The Sea; and Chemicrazy by That Petrol Emotion. Other than a full-color back page promoting Pepsi, the ads we in black and white, and music related. As an added bonus, loyal readers could send in for a free cassette sampler with artists like The Sundays, Bad Religion, and The House Of Love.