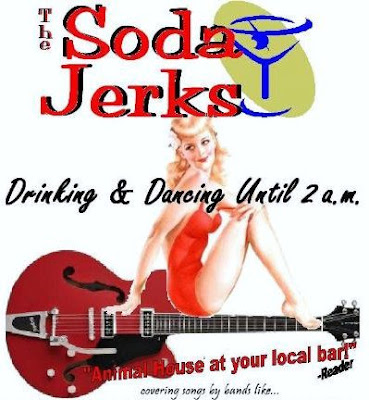 Happy Days Is Here Again. The Soda Jerks, a side project for some of the members of the power pop band The Romeros, will be bringing the sounds of the 50s and 60s to the smaller room at The Abbey Pub tomorrow night, January 29th. The six-piece-band out of Blue Island, IL has been together for almost a decade and cites Otis Redding, Sam Cooke, Buddy Holly, and The Rolling Stones among its influences. Recently adding tenor sax/keyboards player Alex Francois no doubt helps in covering those old Motown hits, and he can harmonize with guitarist-vocalist Gus Fuller and bassist-vocalist Tom Gerez. Guitarist Michael Vanderbilt and drummer Brian Fee round out the band. The Soda Jerks’ motto is “Bringin’ that sweet soul music,” but it looks like they also play The Beach Boys, The Dave Clark Five, and The Who. The show starts at 9:00PM, and it's free.

On A Sad Note. Gladys Horton, the lead singer for 1960s Motown girl group The Marvelettes, has passed away. The trio was best known for “Please Mr. Postmans,” which would later be covered by those avid American R&B fans, The Beatles. Terri Hemmert, host of WXRT’s weekly Breakfast With The Beatles show, offered a touching blog on the station’s website.

Cool People At A Nice Place. Singer-guitarist Phil Angotti has chosen the posh Park West as the venue for his CD release bash next Thursday, February 3rd. An impressive lineup of special guests, including Mike Zelenko, Carolyn Engelmann, Tommi Zender, Ellis Clark, Steve Dawson, and Eric Howell, will be on hand as Angotti unleashes the songs from People and Places. A new video, which also features some notable local musicians, will be shown before the performance. Doors open at 7:30PM.

Holy Anti-Nuclear Benefit! Rolling Stone is reporting that Prayer Cycle 2: Back To Zero, a new charity CD that benefits the no nukes organization Global Zero, will includes tracks by Sting, Sinead O’Connor, and Robert Downey Jr. A previously unreleased recording of Jim Morrison reciting his poem “Moonshine Night” will be among the “world prayers” included on the album. The first Prayer Cycle was released in 1999.

Overthrow Chicago. Power pop fans in the Windy City will want to set aside a chunk of time this coming April for the return of International Pop Overthrow. This year’s fest will run from the 14th through the 23rd at various venues in town. The schedule hasn’t been released yet, and there’s no indication that founder David Bash will be doing anything special to celebrate his tenth annual visit here. But this guy has such a knack for picking power pop acts, there’s no doubt IPO Chicago 2011 will be another smash.

From Grace To Gwen. The Rock And Roll Hall Of Fame’s new photography exhibit, Girls On Film: 40 Years of Women In Rock features shots taken by Anastasia Pantsios from 1969 to the present day. Grace Slick, Patti Smith, Joan Jett, Tina Turner, and Gwen Stefani are among the female performers being honored. The exhibit opens February 14th at the museum in Cleveland.