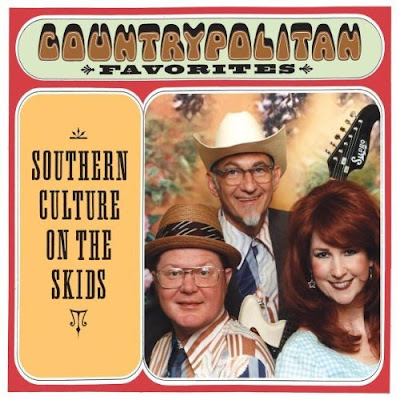 Note: This review originally appeared in the Illinois Entertainer in 2007. As far as I know, my prediction that this CD would help the band appeal to a more mainstream audience didn’t come to pass. Oh well, it was still a solid effort.

Southern Culture On The Skids has been brewing its Dixie-flavored rock for nearly 25 years, but Countrypolitan Favorites might be the album that finally clicks with a mainstream audience. It’s a rousing collection of covers in which Country & Western standards are electrified and rock classics are given an old-fashioned twang. Not every song is completely transformed, but all of them are fun.

Countrypolitan is also notable for the band’s inventive choices. Who else would have thought of roughing up Lynn Anderson’s “Rose Garden,” let along Claude King’s “Wolverton Mountain.”? The Who’s “Happy Jack” is rendered with peppy banjo, while the early garage rock of The Nashville Teens’ “Tobacco Road” is charged with a Creedence Clearwater Revival style arrangement. Singer-bassist Mary Huff brings an authentic country wail to an exotic take on Wanda Jackson’s “Funnel of Love” and singer-guitarist Rick Miller does a nice job crooning along with some playful piano on “Engine #9.” “Let’s Invite Them Over,” a tribute to spouse-swapping, sounds right at home on a CD that gleefully hops from one genre to another.