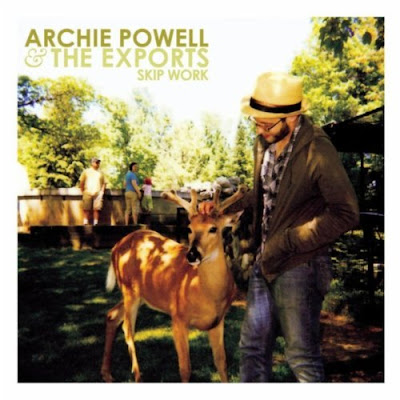 Singer-guitarist Archie Powell must be a huge Fountains Of Wayne fan because he uses that band’s recipe of mixing power pop with social satire throughout Skip Work. Powell adds a heavy dose of slacker angst, coming across a restless young dude who’s never content no matter where he is or what he’s doing. In other hands, that attitude could be a drag, but with Powell cracking wise while Ryan Export, Adam Export, and Brian Export are playing energetically behind him, whining becomes an art form.

“Milkman Blues” presents its title character longing to make time with a housewife whose husband is at work, rather than finish his route. Even being a musician is filled with frustrations, causing Powell to declare that he’s sick of singing on the melodic “All Tuckered Out,” and note that “rock & roll is just a pyramid scheme” on the energetic “Piggy Bank Blues.” "Mattson Is A Flake" pokes fun at a guy who never comes through on his promises to check out Powell's band. The only people who come across as happy on Skip Work are a man and woman trapped under an avalanche in “The Darndest Things.” At least they’re able to escape “The world that we’ve outgrown/In the comfort of our snow and ice chateau.”