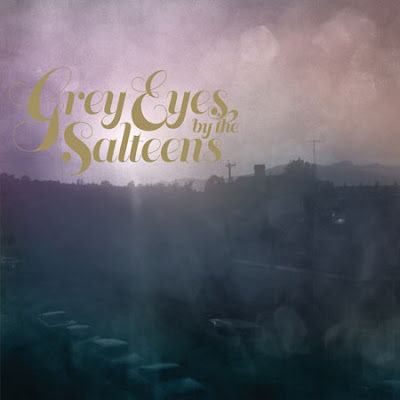 NOTE: This review originally appeared in the Illinois Entertainer.

The first thing that comes to mind while listening to the latest effort from The Salteens is that this band must have one huge rehearsal space. There are 10 members, including musicians who play tuba and flugelhorn, but the only guitar playing on Grey Eyes comes courtesy of producer Todd Simko, who sat in on two tracks. The elaborately orchestrated songs, mostly composed by vocalist-piano player Scott Walker, exude the anticipation of a musical theater troupe preparing for opening night.

The defiant attitude of “Everything They Know About Us” gets a boost from a triumphant horn arrangement, while “You’re Taking All Of This Too Far” sashays to a breezy 1960’s vibe. It’s also a safe bet that this co-ed ensemble has spent some time listening to the band Chicago. Vocalist-piano player Carrie Tennant wrote the wistful lyrics to “Savings And Loans,” a European flavored tune that also features her on lead vocals. The catchy “If Love Is Gone Where Do We Go From Here,” which finds The Salteens sounding remarkably like The Smiths, is the only track on Grey Eyes where all that fanciful instrumentation seems out of place. Sometimes there is such a thing as gilding the lily.