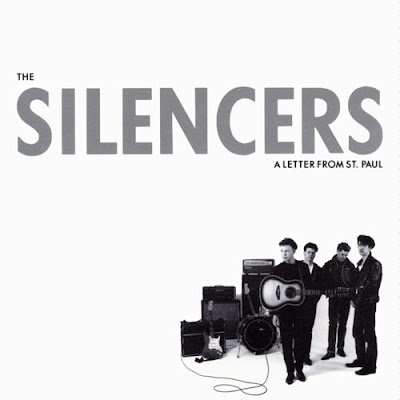 A semi-regular feature that offers a review or article I wrote in the near or distant past. It takes its name from a line in a sketch Dave Drazin once wrote back when we were members of the Famous In The Future comedy group.

Note: This review originally appeared in the Illinois Entertainer. A short time after this review came out, I interviewed lead vocalist Jimmie O’Neill prior to a concert by The Silencers at The Metro in Chicago. The resulting article also ran in the Illinois Entertainer. During the interview, I asked about “Bulletproof Heart,” which O’Neill had written and performed with his previous band, Fingerprintz. We agreed that it was a great song that should have been a hit, but O’Neill told me at the time he had no plans of recording it with The Silencers. There were no Fingerprintz tunes in The Silencers’ show that night, but there was a rousing cover of The Rolling Stones’ “Gimme Shelter.”

Fans of the quirky pop/punk band Fingerprintz will be happy to discover that its lead singer Jimmie O’Neill and guitarist Cha Burns have resurfaced with The Silencers. Their new band has scored a hit with the majestic “Painted Moon,” so there’s hope that A Letter From St. Paul can escape the bargain bin fate of the three Fingerprintz albums.

As chief songwriter for The Silencers as well as his old band, O’Neill has always been obsessed with the bizarre. A Letter From St. Paul is peppered with his usual subject matter; lust, murder, drug addiction, insanity, and even visitors from outer space. For O’Neill, they’re all related.

He’s also added ambiguous spiritual references, although the title track deals with a correspondence from a deranged fan from the city in Minnesota as opposed to the writer in the New Testament. Elsewhere, there are lines likes, “The Holy Ghost’s on a haunted train” and “sex and prayers and molotovs.” Even if the lyrics get a bit murky, the band has crafted catchy melodies around them on a number intricately layered songs. As usual, O’Neill savors matching disturbing images with pleasant melodies. In addition to “Painted Moon,” the CD’s other standout is the hauntingly sad “I Can’t Cry,” which features Burns’s shimmering guitar playing.