45 RPM Memories: The Pink Parker - “Hold Back The Night” 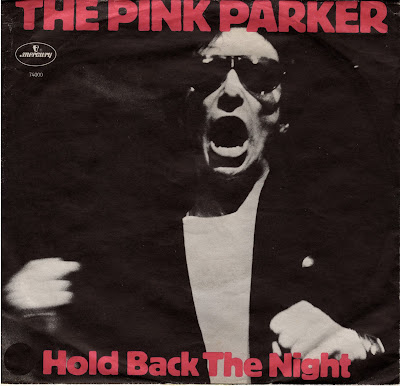 Sometimes it’s as much of a nostalgia trip to look back to where I bought a record as it is listening to the record itself. As those of us in Chicago brace for what the weather reports claim could be up to a foot of snow, I can still recall the great blizzard of 1967, and the tiny record/electronics store where I bought The Hollies’ Stop Stop Stop album with money I earned shoveling our neighbor’s walk.

I can also still remember where I bought The Pink Parker “Hold Back The Night” 45 EP back in 1977. It was called Yardbird Records, and had human manikins with bird heads in the front window. There weren’t too many places on Chicago’s staid southwest side where you could find a wide selection of punk and new wave releases, but this was one of them. Kroozin Music’s stores might have been the only other options, although I vaguely remember Triangle Records.

I had heard “Hold Back The Night” on the radio, but to be honest, the real selling point for me was that the record was pressed on pink vinyl. Not that Graham Parker & The Rumour don’t do a great job of covering this earlier hit by The Trammps. Parker’s raw vocals and the horn section create a classic soul feel in this tale of a heartbroken guy who dreads every evening because he knows he’ll be haunted by dreams of his former lover. Side A also features the romantic “(Let Me Get) Sweet On You,” which is pretty similar to “Hold Back The Night.” Both songs were produced by the highly successful Robert John “Mutt” Lange, and feature Brian Robertson of Thin Lizzy on guitar.

The B-Side of EP, produced by Nick Lowe, gives a clear indication of why Graham Parker & The Rumour were considered a top notch concert act, as the band burns through live versions of “White Honey” and “Soul Shoes.” Unfortunately, I never saw Graham Parker & The Rumour back in those days, but I did catch an entertaining solo performance by Parker at a Chicago street festival in 2009. You can read my review of that show in the Archives of this blog, under August, 2009.