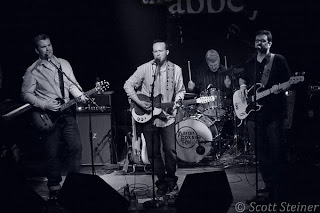 The Friday, April 20th showcase for International Pop Overthrow - Chicago offered a particularly strong lineup comprised of several musicians I’ve covered for Broken Hearted Toy and/or the Illinois Entertainer. Arriving a little after 7:00 PM, I checked it with IPO main man David Bash, who works every showcase; introducing acts and hyping each one with updates on Facebook. I’ve interviewed Bash on three or four occasions as part of the IPO - Chicago preview I write each year for the Illinois Entertainer. His enthusiasm for the traveling power pop/indie rock festival he started 13 years ago in L.A., and the  bands who participate in it, is unmistakable.

Aaron Fox & The Reliables, marking their third year at IPO - Chicago, treated the audience to a seven-song preview of their follow up to 2010’s Late Too Soon. The catchy “Unpromised Land” and “What We Think” were immediate grabbers that highlighted the band’s knack for guitar-driven arrangements and impressive harmonies.

Go Time! followed with a strong set of songs that explored the harder edges of power pop. Songs like “Reluctant Hero” from the band’s new Boneshaker CD were particularly noteworthy, and Go Time! added a country and western twang on a few of their other songs. The ambitious band is already making plans for its next release.

Fun With Atoms, visiting from Green Bay, Wisconsin, have a storied power pop history that includes recording with producer/musician Butch Vig, as well as at Shoes’ Short Order Recorder. They played energetic power pop originals at IPO this year, along with a rollicking cover of The Cyrkle’s “Red Rubber Ball.”

IPO veterans The Valley Downs opened with a slowed down, C&W flavored take on The Clash’s “Should I Stay Or Should I Go?” before moving on to catchy originals like “Sorry” and “Drama Queen.” The band was working with a last minute replacement on guitar, but he filled in admirably.

Singer-guitarist Mimi Betinis and his group played an entertaining mix of gems from his Pezband days as well as material from his well-crafted 2010 solo effort, All That Glitters. It was great hearing the timeless “Please Be Somewhere Tonight” and “Baby, It’s Cold Outside,” again, along with the sexy new romp, “Come On Down To My House.”

Due to the logistics of taking public transportation from the northside of Chicago to downtown and then out to Palatine, I had to miss the last two acts on the showcase. But I definitely still got my money’s worth.
Posted by Terry Flamm at 11:52 PM