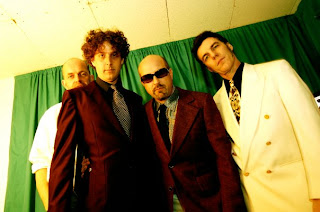 As International Pop Overthrow - Chicago comes down to its final days for 2012, there are still some potent lineups to check out at Red Line Tap. Friday night features three bands I've enjoyed in the past, and four that I don’t know as well. But IPO is always worthwhile even if you’re not familiar with any of the acts.

Founder/CEO David Bash and his girlfriend Rina do a great job of lining up talent for these shows.
International Pop Overthrow has a new website with links to almost all of the bands on the schedule. “I need to give my props to Jerry Lindman and Lecompton Alternate for building such a fine site,” Bash wrote during an email interview I did for the Illinois Entertainer. I didn’t have space to mention that in the article, so I’ll add it here. Bash explained that the site is a work in progress, and he hopes to have videos on it in the near future. And now, here’s the Friday night lineup. All acts are from Chicago unless otherwise noted.

The Pounders are visiting from Detroit, and played IPO - Detroit on April 14th. The four-piece band claims the British Invasion and Motown as major influences, and released their You And What Army CD in January, 2011.

The Viaducts  may have a new CD titled Mission To Destroy, but don’t get any ideas about this being a heavy metal band. The trio’s melodic songs like “Drive-Thru Girl” and the title track fall on the lighter side of power pop, although the guitar figures prominently in The Viaducts’ approach.

Magatha Trysty is back for its third year at IPO - Chicago, and have their full-length debut coming out this summer. There’s no mention on the band's press release about previewing new songs tomorrow, but who knows. In my review of their self-titled EP a while back on BHT, I noted, “the husband and wife team of vocalist-keyboards player Catherine Bevard and vocalist-guitarist Christopher Bevard anchor a sound that falls somewhere between melodic power pop and cutting edge indie rock.”

Too Much Saturn specializes in Midwestern power pop, although their alphabetically ordered list of influences ranges from The Beatles to Frank Zappa.

If you’ve never seen one of the 500 bands guitarist Dag Juhlin performs in, The Goldstars are a good place to start. (He’s also in the The Slugs, Poi Dog Pondering, and Expo 76.) I saw them open for Hoodoo Gurus a few years back at The Abbey Pub, and their songs were catchy and fun. The instrumental “Purple Girlfriend” was one of my 31 Songs For Halloween blog posts.

Van Go’s latest CD, The Long Lost Last Call, is filled with hard-edged power pop with biting lyrics, particularly “Invisible Girls” and “Your Three Minutes Are Up.” They do a rousing cover of Elvis Costello’s “Girls Talk” as well. This will be bassist Lou Galassini’s second straight night at IPO - Chicago; he’s also a member of The Right Tidys.
Posted by Terry Flamm at 11:27 PM