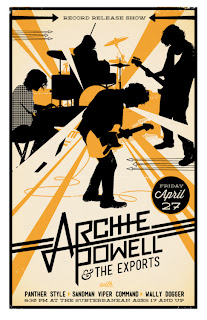 Poster art from Archie Powell And The Exports website.

Before moving on to a preview of tomorrow afternoon’s International Pop Overthrow - Chicago showcase, here are a few other points of interest.

Powell To The People! Archie Powell And The Exports  are having CD Release Party tonight at  9:00 PM at Subterranean. Panther Style, Sandman Viper Command, and Wally Dogger are also performing.

If you miss the show, be sure to check out the band’s highly impressive latest release. Hopefully, my review of Great Ideas In Action will be in the May Illinois Entertainer. The CD is a collection of extremely melodic though bitterly funny depictions of working class (and unemployment class) people coping with the modern world. I’m not alone in already thinking it might be one of 2012’s best.

Aaaarggggdman! The Pirates! Band Of Misfits, which opened at movie theaters today, has a number of things going for it. It comes from Aardman Animations, creators of the hilariously droll Wallace & Gromit series; it features former Doctor Who star David Tennant as the voice of Charles Darwin; and according to reviewer Nell Minow in today’s Chicago Sun-Times, it has a new song by Flight Of The Conchords.

What’s Going On? Black Ensemble Theatre, now in its new home at 4450 N. Clark Street, has a well-deserved reputation for creating compelling and entertaining musical biographies based on African American superstars. The Marvin Gaye Story, written by the theater’s guiding light, Jackie Taylor, begins previews on May 11th, and officially opens on the 20th.

Miles Started A Joke. I was glad to help out at the recent Jokes 4 Miles  30 Hour Joke-A-Thon at the Laugh Factory in Chicago. I dropped by around 4:00 PM Wednesday, and was put in charge of  getting people to sign a release form after they were videotaped telling a joke to Miles Austrevich. His father, Len, has been finding various creative means of collecting 5.000 videotaped jokes. Watching people from around the world taking the time to cheer him up does Miles a wealth of good while he’s enduring another round of therapy for his brain cancer.

The campaign has been getting some good press coverage lately, but Len still has a ways to go before reaching his goal of 5,000 videotaped jokes. So once again, I’m appealing to comedians, theater people, and musicians to pitch in. It doesn’t have to be a joke; maybe just a few minutes of a song, a monologue, or just a wish to feel better. Miles will soon be undergoing an autologous stem cell transplant that will require him to be in isolation for months.

Everybody’s Gonna Play On The Very Last Day. Tomorrow’s the last day of International Pop Overthrow - Chicago 2012. Visitors to the daytime showcase will get a taste of what the very first International Pop Overthrow, held 14 years ago in Los Angeles, was like. 92 Degrees, one of three Chicago acts that appeared at that groundbreaking event, (The Critics and The Idea were the other two) will kick things off at 1:00 PM. They’ve been performing at International Pop Overthrow - Chicago for several years, and haven’t lost one degree of their power pop edge. The trio will be playing songs from their Money Makes The World Go ‘Round vinyl EP, their self-titled CD debut, and if past shows are any indication, some gems that were never recorded, but hopefully will be someday.

Former UK residents Charlie and Ryan O’Brien of The Unswept will be making their American debut at Red Line Tap. The two songs available for free download on their Bandcamp page, “She’s So Cool” and “You’re Going Home,” feature catchy melodies, harmonies, and ringing guitars.

Jess Godwin bills herself as a singer-songwriter misfit with soul. She sings and plays keyboards on the easy-going “Out With The Old,” which mixes R&B with a bit of Country music. It’s available for free download on her website. Godwin sounds like she has a full orchestra behind her on some of the tracks from her three EPs, so it will interesting to see what she does at Red Line Tap.

A veteran of the Canadian club and festival scene, singer-songwriter Andy Griffiths has released the 8-song EP No Reason, as well as the 2011 full-length CD, Looking At Life. His melodic songs mix acoustic and electric guitars with his rough hewn, engaging vocals.

The Michigan-based power pop band Your Gracious Host is fronted by singer-multi-instrumentalist Tom Curless, and will have special guest Brian Leach on board for its IPO - Chicago gig.

Singer-guitarist and Jam Records honcho Jeremy is an IPO veteran who travels to many of the cities on the festival’s circuit. He creates melodic power pop songs, and has been known to cut loose on his axe in live performances.
Posted by Terry Flamm at 10:13 PM