CD Review: Kaiser Chiefs - Start The Revolution Without Me 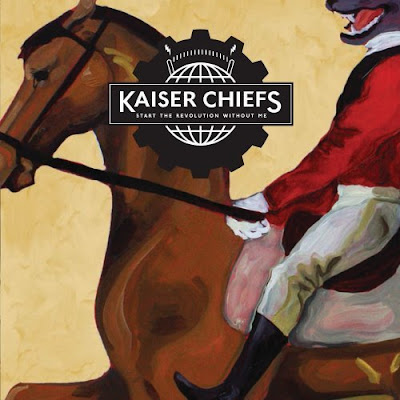 A closer look at the cover of Start The Revolution Without Me reveals that the horseback rider participating in a fox hunt is actually a fox. It’s a fitting image for a band that relishes poking fun at its fellow English countrymen. This latest release from Kaiser Chiefs continues the steady flow of satire, while dabbling in more techno-oriented arrangements than the band has used in the past.

“On The Run” casts a suspicious eye toward the media, using rapid fire lyrics and energetic keyboards. “Cousin In The Bronx” takes a swipe at know-it-all Americans, while the acidic “Things Change” borrows heavily from David Bowie’s “Fame.” The band’s only misstep is “Heard It Break,” with its corny lyrics about a sprained heart and cheesy synthesized Caribbean rhythms. By contrast, “Kinda Girl You Are” sets a guy’s infatuation to a high speed pop arrangement. The punchy “Problem Solved” offers some biting sarcasm as lead vocalist Ricky Wilson notes, “An empty head is not something I would aspire to/That being said, it must be nice to be oblivious.”