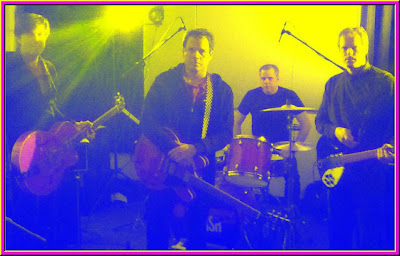 Damn Right I Got The Pastel Colors. SOPRO is presenting its 25th Annual Easter Parade All-Star Blues Revue tomorrow night at Phil McKracken’s Live in Worth, IL. The critically acclaimed jazz band The Chicago Horns will be there, along with vocalist Deb Seitz, who’ll be marking 10 years of appearing at the event. Guitarist-vocalist Smiley Tillmon is listed as a very special guest. Showtime is 9:15 PM, and there will be prizes, champagne, and autographed photos from the storied SOPRO archives. Phil McKracken’s Live is located at 6602 W. 111th Street.

Another Great Reason To Visit Ireland. Georgina Flood is a Dublin-based artist who specializes in amazingly lifelike portraits of The Beatles, as well as celebrities like Marilyn Monroe and Johnny Depp. She recently had a Facebook post about the Temple Bar Beatles Festival, which is taking place in Ireland on the weekend of July 13th -15th. Original Fab Four drummer Pete Best tops the guest list, which also includes John Lennon’s half-sister Julia Baird, author of the book Imagine This: Growing Up With My Brother John Lennon; former Apple Records CEO Tony Bramwell; and former Wings guitarist Henry McCullough. Several local bands are on tap, and there will be comedy and an art show.

Laugh Around The Clock. The Jokes 4 Miles Joke-a-Thon will kick off at 2:00 PM on Tuesday, April 24th at the Laugh Factory in Chicago and run non-stop through 9:00 PM on Wednesday. Jokes 4 Miles is a project run by veteran stand-up comedian Len Austrevich, who has set out to collect 5,000 videotaped jokes for his son. Miles Austrevich has brain cancer, and gets a huge emotional boost from watching the clips.

Len Austrevich could use some volunteers to help with the event. It would be especially cool to get a number of people from Chicago’s vibrant theatre, comedy, and music scene to take part since they would no doubt inspire others to join in. This is an opportunity for everyone to be a star, and to take part in a worthwhile cause. So come by the Laugh Factory, at 3175 N. Broadway, during the marathon and share a joke with Miles. Another Joke-a-Thon will be held at the Laugh Factory in Los Angeles.

Back To dell' 80s. Chicago dell’Arte Theater is holding an 80s Night on April 14th at The Den Theatre to raise funds for Comm-80s-a, the first show of its 2012 season. There will be games, a costume contest, and two live bands. Tickets are $10, $8 for people who come in costumes. The Den Theatre is located at 1333 N. Milwaukee Avenue. The fun starts at 8:00 PM.

Dial M For Fiction. Local writer M. Molly Backes will hold the launch of her first novel, The Princess Of Iowa at StoryStudio in Chicago on April 18th, from 7:00 to 10:00 PM. Scheduled guests include local writers, improvisers, and filmakers. Backes is the Assistant Director at the center for writing and related arts, which is located at 4043 N. Ravenswood, #222. She promises this will be the biggest party at StoryStudio in years.

Dot Dash & Fly. Dot Dash, the Washington, DC-based band whose energetic, guitar-driven music recalls the days of The Clash and The Jam, has created a cool performance video for its song, “Learn How To Fly.” Dot Dash has upcoming gigs at The Black Cat in Washington, DC on April 21st, and on May 20th at the NYC Pop Fest in Brooklyn.

Up Close And Scary. The Ex-Girlfriends Club’s http://www.theexgirlfriendsclub.com/ video for its cover of The Sonics’ “The Witch” takes viewers onstage as the garage rockers careen through the song in a bar. The song is from The Ex-Girlfriends debut effort, Boo Hoo Hoo.

Jammin' With JIP. JIP, a Chicago rock trio featuring singer-guitarist Jim Gwynn, has a gig coming up at The Elbo Room on Lincoln Avenue on Sunday, April 15th. My review of JIP’s latest release, Year X, is in the current issue of the Illinois Entertainer.