A Wolf And A Princess Emerge From The Forest 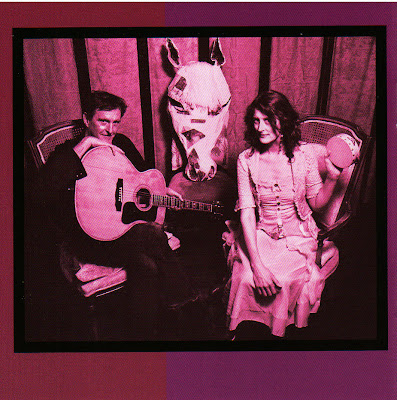 It’s not unusual to find Carla Hayden and James Moeller in the midst of a creative event. As founding members of Black Forest Theatre, these amiable free spirits have staged their original productions at venues around Chicago’s north side and in Evanston. Like my former comedy group, Famous In The Future, they’re veterans of the Mary-Arrchie Theatre’s annual Abbie Fest. That’s where I first discovered the off-kilter charm of Black Forest Theatre.

Hayden and Moeller’s single-word-named band, Whitewolfsonicprincess seemed to flow naturally from their theatrical vision, and exudes a similar avant garde aesthetic. They released their first CD, This Car Available in 2008. Back then, I described it as offering, “consistently fun and imaginative word play, usually set to slinky, sparse arrangements” in a review for Broken Hearted Toy. Hayden and Moeller have taken the scenic route to a follow-up disc, experimenting with new members, playing out more often, and inviting other musicians to join them in tribute shows to icons like John Lennon and Bob Dylan.

Whitewolfsonicprincess hosted a 10 + 1 CD release party at the Redline Tap this past Sunday afternoon. Despite the unusual time slot, the event drew a good-sized crowd that was treated to free pizza and a cake decorated with the 10 + 1 cover. It was fun seeing some of my old mates from Famous In The Future, Frank Carr, Desiree Burcum, and Michael Hora. Carr and Burcum have a musical side project, dubbed The Rut, that has performed at some of WWSP’s tribute shows.

After a short set by Chris Bock, who sang an engaging mix of indie rock originals and cover versions while strumming an electric guitar, the core of WWSP - - vocalist Hayden, guitarist Moeller, bassist Tim O’Brien, and drummer Rich Meher - - took the stage. Moeller explained that 10 + 1 is best appreciated when all 11 tracks are heard straight through.

The quartet played a few of those songs before being joined at separate times by guitarist Victor Sanders and saxophone player Nick Anaya. They added texture and power to WWSP songs like “Lady In The Sand” and “Fallen,” respectively. Hayden handled most of the lead vocals while Moeller and O’Brien provided back-up vocals. Moeller sang lead on the mysterious “Inner Light.”

I haven’t had a chance to fully digest 10 + 1 yet, but already it seems more full-bodied and ambitious than This Car Available. Whitewolfsonicprincess is no longer a Black Forest Theatre side project; it’s a thriving, separate entity. 10 + 1 is available at Vintage Vinyl in Evanston and Chicago’s three Reckless Records stores. I'm hoping to post a review in the near future.

hi terry! great seeing you at our show! thanks for the kind words. And yes, you can publish your novel for sure... damn the torpedoes and the naysayers! keep up the good work!