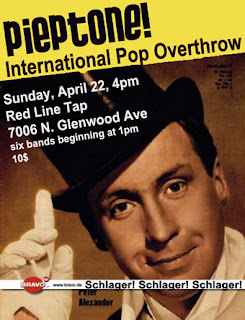 International Pop Overthrow - Chicago is to Broken Hearted Toy what the Christmas season is to retail. But before moving on to that subject, here’s some other important business.

In Tribute: Although I had been familiar with The Band from its better known FM radio hits, it wasn’t until I saw The Last Waltz that I fully realized their impact on rock music. Martin Scorsese’s film not only celebrated and explored the group’s uniquely homespun sound, it clearly defined each of the individual members. Singer-drummer Levon Helm came across as intense as talented. Little wonder that he and Robbie Robertson went on to acting careers. Over the years, Helm’s reputation only grew stronger as he battled cancer while continuing to make music.

Dick Clark combined two emerging mediums, rock ‘n’ roll and television to promote talented performers and bring people together. He enabled the various races to dance together and express their joy of music. I still have fond memories of watching American Bandstand every Saturday morning.

Trouble Ahead. Artist Nicholas Sistler’s  latest exhibition, Trouble, will run at Firecat Projects,  2124 N. Damen Avenue, from April 27th through May 19th. Sistler creates intriguing miniature paintings that incorporate sensual and occasionally disturbing imagery, with vibrant colors. An Artist’s Reception will be held next Friday, April 27th, from 7:00 to 10:00 PM.

Stand Up And Be Comic. Be sure to drop by the 30-hour JOKE-A-THON taking place at Laugh Factory, from this Tuesday, 3:00 PM through 9:00 PM Wednesday night. There’s no admission charge for an opportunity to stand in front of camera and have your joke recorded for a great cause. The Jokes4Miles campaign started when comedian Len Austrevich decided to collect 5,000 videotaped jokes for his son, Miles, who is suffering through his fourth recurrence of brain cancer. Miles gets a huge boost from watching   videos of people like Jay Leno, Bill Murray, Tim Kazurinsky, Ernie Banks, Bobby Hull, and countless others who have taken the time to send along a humorous message. Numerous groups, schools, companies, and charitable organizations have pitched in as well.

Miles’s need for cheering up will become more acute in the coming months when he’ll undergo a treatment that will require him to be kept in isolation. The jokes don’t have to be original, and you don’t need the delivery of a Jerry Seinfeld or Eddie Murphy to make this work. They should be relatively clean and to the point, but other than that feel free to wing it. So gather as many friends and/or family members as you can, and come down and make it a party.

IPO Chicago -Day Four. International Pop Overthrow rolls into Day 4 on Sunday, with an eclectic afternoon showcase as well as a more power pop-oriented one in the evening.

The Pondhawks will be performing songs from their upcoming EP, Dreaming Over Ireland, during its 1:00 PM show. Other acts on the early showcase include singer-guitarist, Shalini, who draws upon Cheap Trick, The Raveonettes, The Undertones, and The Bangles as influences; glitter rockers, The Artist Formerly Known As Vince; the pop quartet Wiplot, Pieptone, a band that claims to play “German chart hits and rarities from the 50s and 60s”; and psychedelia masters The Luck Of Eden Hall, who released two impressive CDs in the past year  - - Butterfly Revolutions, Vol. 1 & 2.

The night time showcase kicks off at 7:30 with The Uncommon Houseflies, a four-piece power pop band from Lousville, KY;  power pop/punk quartet Collectors; indie rockers, The Hurtin’ Kind; pure power pop master Wes Hollywood, who recently released the very good new LP, Fantasy Arcade; Dave Rave, a tireless Canadian rocker who’s the only performer to have played in every city on the IPO tour; and Squeegee, a female fronted band that brings a hard rock edge to catchy arrangements.
You can find links to all of these bands on the International Pop Overthrow website.