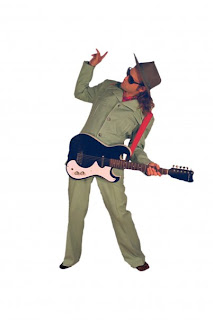 International Pop Overthrow closes out its 2012 run in Chicago tonight with a predominately indie rock showcase starting at 7:30 PM. Ellis Clark is the only act that I've seen, although my review of Left Turn At Albuquerque's In Broad Daylight CD should be in the Illinois Entertainer soon. Please see the IPO website for links to all the bands.

The Shifties pursue a variety of musical styles, from experimental to straight ahead pop, on their nine-track CD, Song Dynasty. They’ve recorded songs for film and TV projects.

The four-piece band Common Shiner will be playing indie rock songs from their latest CD, Before They Sold Out: Part 1.

Panoramic And True plays melodic indie rock tunes like “California.” Their new self-titled is available in 12” vinyl as well as a digital download.

Ellis Clark is a veteran musician/producer who has performed at IPO - Chicago with a variety of bands. He’s currently a member of The Handcuffs, and always comes up with something intriguing for his own live shows.

The coed band GUH is lead by vocalist Lexi, and plays an energetic mix of punk and glam rock. I’ve never seen them, but I’m guessing they’ll give IPO - Chicago 2012 a rollicking sendoff.
Posted by Terry Flamm at 8:28 AM