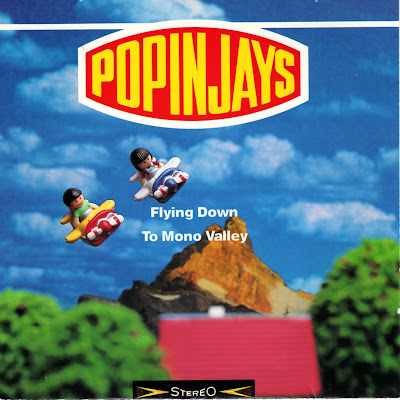 Note: This review originally appeared in the Illinois Entertainer in 1992.

Flying Down To Mono Valley, the American debut from England’s Popinjays, is so abundantly rich with catchy melodies and harmony vocals, it’s jarring to discover the bitter lyrics within these pop confections. Led by vocalist Wendy Robinson and guitarist-vocalist Polly Hancock, the band distributes abrasively clever put-downs throughout all 11 songs.

On “Too Jung,” which features an irresistible arrangement, a woman informs her abusive lover of her affair with his best friend by explaining, “He says he feels the same as me, and we laughed at how upset you’d be.” “Nothing” reduces a young couple’s courtship and subsequent life together to a series of mundane events within modern society. At times reminiscent of Debby Harry, Robinson’s alluring voice adds an ironic touch to tracks like “Snowblind,” “Monster Mouth,” and “Vote Elvis.” “We Love You,” which hints at the Rolling Stones’ song of the same name, offers another highlight with its energetic arrangement and sarcastic message.