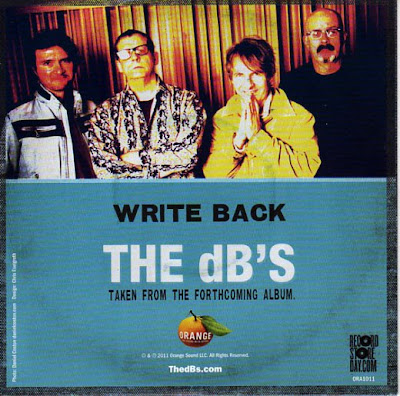 A few weeks ago, The dB’s released a double-sided vinyl single as part of Record Store Day 2011. The jacket states the B-Side, “Write Back,” was taken from the forthcoming album, which might mean that the A-Side, “Picture Sleeve,” is one of those Record Store Day exclusives that becomes a genuine rarity. Regardless of its status, this 45 was definitely worth the effort it took to hunt it down.

“Picture Sleeve” is a mid-tempo romantic fantasy that incorporates those classic elements of a dB’s song; fetching melody, harmony vocals, and clever lyrics. Composed by Peter Holsapple and Chris Stamey, it depicts a guy who’s fascinated with a female drummer for a band he discovers “at the back of the indie bin” in a record store. Spotting her in an ad in New Musical Express furthers his obsession. He sets the picture sleeve up on a shelf so that, “When I walk into the room. there she is again.”

We don’t find out until toward the end of the song that part of the appeal of this drummer is that she reminds him of a woman he knows in real life. “Picture Sleeve” is a fun tune that follows in the tradition of “Behind The Wall Of Sleep” by The Smithereens, “Picture Book” by The Kinks, “Idolizer” by the Hugh Hart-fronted band Wedge, and probably quite a few tracks by Fountains Of Wayne.

“Write Back,” which was written by drummer Will Rigby, has a bit more energy as well as a touch of Country & Western twang. It’s about an unraveling relationship, and how the guy won’t carry on a correspondence with his girlfriend because she doesn’t “deserve to read the words.” There are a lot of quick rhymes like that in the song, as well as more winsome sentiments like, “remember the moon that we found among the clouds?” Like the A-Side, “Write Back” is catchy, with strong harmonies.

It would have been great to hear The dB’s really cut loose like they did on “Ask For Jill” from Repercussion or “She’s Got Soul” from Like This, but hopefully there will be at least a few freewheeling songs on the new CD.

Nice blog; thanks for featuring my fave band, The dB's.

Fans of The dB's might want to check out my new blog devoted to the band:

The first post with rare music is already up and new ones will be posted every Friday.