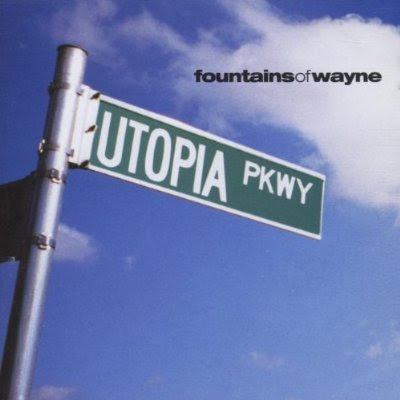 With the next Fountains Of Wayne CD, Sky Full Of Holes, due out on August 2nd, it might be a good time to look back at one of the band’s earlier releases. Here’s a review that originally appeared in the Illinois Entertainer in 1999.

For Fountains Of Wayne, poking fun and having fun pretty much go hand-in-hand. The band’s songwriting duo of vocalist-guitarist Chris Collingwood and bassist-vocalist Adam Schlesinger are well known for coupling barbed social observations with bouncy pop melodies.They take a similar approach to Squeeze, but with unabashedly American references that conjure images of shopping malls and roadside diners.

The Squeeze comparison seems particularly apt for “Hat And Feet,” a playful blues shuffle built on the cartoon image of a guy flattened by his girlfriend’s cruelty. On the more energetic “Red Dragon Tattoo,” a young geek is “fit to be dyed,” hoping to impress a gal with his new body art. The rocking “Go, Hippie” lampoons an aging flower child and tosses in some Hendrix style jamming, while the more wistful “A Fine Day For A Parade” paints a sympathetic portrait of an elderly woman.

The irresistibly catchy “It Must Be Summer” contrasts a sunny arrangement with a frustrating situation where a guy pines for a woman who’s too busy out having fun to spend time with him. “Laser Show” hypes a trip to the Hayden Planetarium as if it were a major rock concert, while “Lost In Space” offers a character study of an attractive woman who may not be human. The disappointing title track, a generic take on the life of a struggling musician, is the only misfire on an otherwise witty and entertaining album.