CD Review: Supergrass - I Should Coco 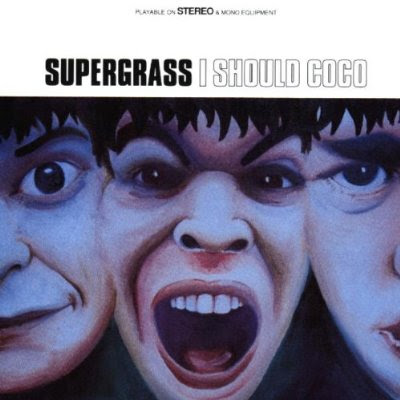 I’ll always remember how when the first Supergrass CD came out in 1995, then Illinois Entertainer editor Michael Harris told me they were a Terry Flamm band if he ever heard one, and suggested I do the review. He was right about me really liking their music.

My wife Pam and I had a DJ for our wedding who was willing to play just about anything we wanted, including songs we brought to him on CD, cassette, or vinyl. Per our request, he played “Psycho Chicken” by The Fools instead of “The Chicken Dance,” and at the end of the reception, he played the final track from I Should Coco, which is “Time To Go.” The DJ liked it so much he played it twice, and said he was going to use it other weddings.

Unfornutately, Supergrass broke up within the last year. Anyway, here’s the review I wrote for the Illinois Entertainer.

You have to admire a band that’s not afraid to sound like The Smurfs on their debut album. Then again, the catchy “We’re Not Supposed To,” with its chirpy vocals and childlike lyrics, is the 10th track. By that time, Supergrass has firmly established themselves as one of the UK’s more interesting new acts.

Hailing from Oxford, England, the trio follows in the high-energy tradition of The Undertones and Buzzcocks. The album kicks off with a rollicking quest for a fun night out, “I’d Like To Know,” which features the highest harmony vocals this side of Lou Christie. Supergrass rips through a number of energetic gems, such as “Caught By The Law,” “Lose It,” “Strange Ones,” and “Lenny.” They cap off this flawless effort with “Time To Go,” an acoustic Syd Barrett style charmer that could become the ‘Last Call’ song for bars. Like a night spent in an English pub, I Should Coco is a blast of eccentric fun.