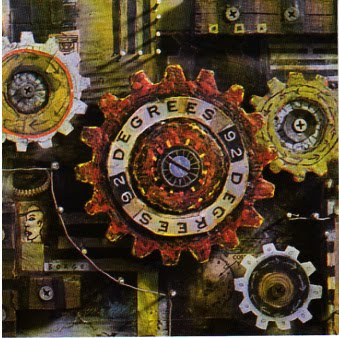 92 Degrees performed an impressive set at International Pop Overthrow - Chicago this past April that included new material. Hopefully, a CD is on the way. Here’s a review of their debut effort, which appeared in the Illinois Entertainer in 1995.

It seems natural the Chicago-based power pop trio 92 Degrees would find a home on Shoes’ independent Black Vinyl label since both bands are heavily influenced by British Invasion music. Co-produced by Shoes vocalist-guitarist Jeff Murphy and 92 Degrees, this self-titled full-length debut shows an emphasis on strong melodies, ringing guitars, and harmony vocals. It’s almost completely comprised of love songs, with the only exception coming via the nasty sentiments of the hard-hitting “Mrs. Jones.”

Love is a subject this band handles well, particularly on energetic tracks like “In Her Glow,” “Sharon Won’t,” and “She’ll Never Know.” Lead singer-guitarist Steve Steffens wrote all 11 of these catchy gems (“When I’m Gone” was co-written with bassist-vocalist Mike Galassini) and his vocals consistently evoke Revolver era Beatles. Steffens and Galassini consistently combine for some airtight harmonies while drummer Dane Svoboda provides a steady backbeat.