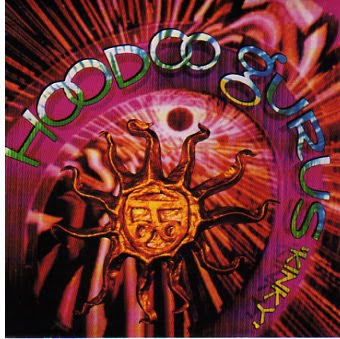 What better way to follow posts about The dB’s and The Bangles than with one featuring the Hoodoo Gurus? The Australian band doesn’t have a new 45 out, but here’s a CD review I did for the Illinois Entertainer back in 1991.

Usually when someone throws a wild party, it’s only a matter of time before the neighbors complain or the cops show up. Consider then, the strange case of Australia’s Hoodoo Gurus, who have been making a joyful noise since 1984, and still can’t get arrested in the States.

Ironically, “Miss Freelove ‘69,” the rollicking first single released from the group’s fifth album, Kinky, is about a party that gets out of hand. It’s classic Gurus fare, irresistibly catchy with a hefty dose of humor, and the perfect invitation to American record buyers to join the party. College radio stations and longtime fans who already know how much fun the Hoodoo Gurus can be will find another winner in this latest release.

Songs like “Something’s Coming” showcase the band’s 1960s style melodies, clever lyrics, and guitar firepower. “Desiree” and “I Don’t Mind” are power pop gems while “Too Much Fun” has a bit more of a hard rock edge. Bangles member Vicki Peterson adds a pleasant touch on back-up vocals to “1000 Miles Away.” Lead vocalist and chief songwriter Dave Faulkner takes aim at would-be martyrs on “Dressed In Black” when he offers support to a down-and-out friend but makes it clear he won’t stand for any self pity.