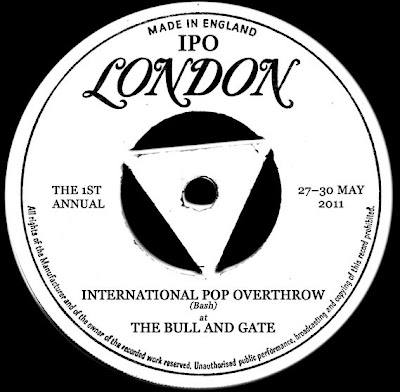 London Crawling. Hand out the cigars and pour the champagne. International Pop Overthrow has given birth. In the interest of sexual equality, let’s not say whether the baby is a boy or a girl; only that it’s healthy and rocking out in England. At 5:45 PM today at The Bull & Gate, London will join the sprawling family of International Pop Overthrow, that celebration of power pop and indie rock that’s staged in cities like Liverpool, New York, Los Angeles (where it originated), Seattle, Milwaukee, and Chicago.

Tonight’s inaugural set opens with international superstar Ben Dlugokecki, and also includes the equally famous Kyle Vincent, Dan Clews, and Penguin Party. Okay, none of these guys rival the drawing power of Lady Gaga, but as in IPO’s other locations, the fun is in discovering new talent. I’ve come across several impressive acts I had never heard of before IPO founder David Bash corralled them for one of his Chicago showcases. Plus, tonight’s lineup includes The Len Price 3, whose 1960s style garage rock actually has won them fans around the globe, including Little Steven Van Zandt. IPO - London will have a showcase each night at The Bull & Gate from tonight through Monday. And yes, the ever-present, globetrotting Dave Rave will be performing.

Comfortably Numb In Palatine. Echos of Floyd will be performing a 10:00 PM show at Durty Nellie’s in Palatine tonight, as part of the Monsters Of Mock series. The club’s website promises the show will feature all the lasers, fog, projections, and mind-altering lighting you’d expect from a tribute to the famous 1960s sitcom barber. Actually, the band, which is comprised of veterans of the Chicago music scene, will be performing the music of Pink Floyd. With an admission price of $5, money won’t be that big of hit.

Summer Of Love. Beatles fans can kick off June in style by dropping by Martyrs’ on the 1st to catch Tributosaurus Becomes The Beatles Vol. 4. Martyrs’ is located at 3855 N. Lincoln Avenue.

God (45 & 33RPM) Speed. Best of luck to Favorite Records, which is holding its Grand Opening at 1535 W. Division tomorrow. The store carries 45s. LPs, publications, and art. The web address I found doesn’t appear to work yet, but you can find them on Facebook.

Even More Fun Than The Oscar Mayer Weinermobile. The Chicago Sun-Times recently picked up a story by Jack Gruber from Gannett News Service about The Hard Rock International 40th Anniversary Memorabilia Tour rolling into Chicago next Thursday. An 80-foot long truck packed with things like Jimi Hendrix’s Gibson guitar; the coat John Lennon wore on the cover of Rubber Soul; and Buddy Holly’s eyeglasses will be on display inside a truck parked outside the Hard Rock Cafe at 63 W. Ontario. The exhibit, which is free and suitable for all ages, opens at 11:00 AM.

The Unlike Button. The four woman band The Like has announced via its Facebook page that it’s canceling all upcoming gigs and going on an indefinite hiatus. Founding members vocalist-guitarist Z Berg and drummer-vocalist Tennessee Thomas have reinvented their band in the past; switching from indie rock to a neo British Invasion and 1960s girl group sound on the 2010 CD, Release Me. One of The Like’s Facebook followers posted a joke that Berg and Thomas will someday return with as 1980s revivalists, but here’s hoping whatever they decide, it will be soon. Meanwhile, I’m still kicking myself for not seeing The Like when they played in Chicago last year.

Tomorrow Comes Next Friday. Sci-fi rockers Tomorrow The Moon, which includes guitarist Steve Gerlach from The Bad Examples, will be kick off a triple bill at 10:00 PM next Friday, June 3rd at Darkroom. Made By Man and Cleveland’s spooky, coed rockers Mr. Gnome are the other acts scheduled to perform. Darkroom is located at 2210 W. Chicago Avenue in Chicago.

Rare Byrd Sighting In Beverly. Roger McGuinn, who wielded a mean 12-string guitar and sang lead on many hits by The Byrds, will be performing June 3rd at the Beverly Arts Center. The center is located at 2407 W. 111th Street on Chicago’s south side. Tickets are $30, $27 for members.

All The Byrds Together. Meanwhile, The Second Disc newsletter is reporting that The Byrds will be one of the first four artists featured in the Sony Legacy label’s new The Complete Album box set series. The Byrds’ collection contains the band’s entire output from Columbia in a single package, with each album sporting its own miniature sleeve. The box set can be pre-ordered from PopMarket.

How Would You Like A Million Dollars? The Arboretum Of South Barrington will hold a Summer Block Party on June 11th that will include a live performance from the hit musical Million Dollar Quartet. The mall is located at 100 W. Higgins Road, at the corner of Routes 59 & 72.

Pledge Your Love To Juliana. Juliana Hatfield’s Speeches Delivered To Animals And Plants is the latest CD to be funded entirely by fans via the PledgeMusic site, and the singer-songwriter plans to donate some of the proceeds to the Save A Sato animal shelter in Puerto Rico, and the Northeast Animal Shelter in Massachusetts. In a recent press release, Hatfield notes, “I really think that PledgeMusic and similar sites are the future of music, especially for people like me who have devoted cultish fanbases but who have never sold a ton of records and don't really fit in anywhere at major labels.” Speeches Delivered To Animals And Plants is set to be released on Hatfield’s own Ye Olde Records on August 30th.