45 RPM First Impressions: The Bangles - Sweetheart Of The Sun 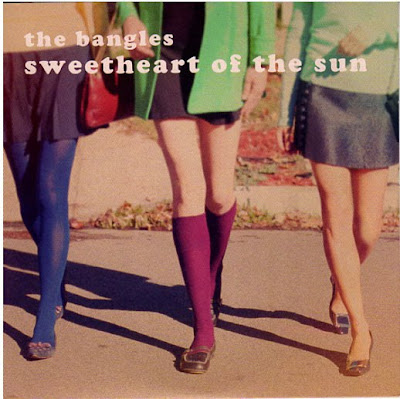 Much like The dB’s, The Bangles have released a mid-tempo new song that plays to their strengths. “Anna Lee (Sweetheart Of The Sun)” taps into the mid-1960s California Scene and could have been a Top 40 hit for The Mamas & The Papas. It’s part of a three-song Sweetheart Of The Sun EP that also includes acoustic versions of “Hazy Shade Of Winter” and “Let It Go.”

It’s hard to figure why The Bangles didn’t release this in conjunction with Record Store Day, and what’s even more odd is that it’s only available at Maurice’s, a chain of women’s clothing stores. As far as I can tell, there are no Maurice’s in the Chicago area. I bought my copy from a terrific eBay vendor who shipped it in the blink of an eye.

For some reason, I was under the impression that Matthew Sweet wrote “Anna Lee,” and I may have incorrectly stated that here in the past. Sweet recorded the song at Lolina Green Studios, and has worked extensively with the band on an upcoming CD. “Anna Lee” was written collectively by Debbi Peterson, Vicki Peterson, and Susanna Hoffs, with all three singing in perfect harmony. Derrick Anderson plays bass.

The song exudes an entire field of flower power, starting with the exotic opening lines, “Got a picture of you in the kitchen, without a stitch on./Beautiful and natural as can be.” It’s a melodic tribute to a free spirit who was desired by men and respected by women. “Quiet power, simple grace. No man could put you in your place.” There’s also some festive “bop bop bop” scat singing and a shuffling beat that’s hard to resist. “Anna Lee” doesn’t sound like any of The Bangles’ past hits, which is a healthy sign that their creative juices are still flowing.

“Hazy Shade Of Winter” features Vicki Peterson and Hoffs aggressively strumming acoustic guitars while Debbi Peterson adds a touch of percussion and Anderson plays bass. The Bangles scored a huge hit in the 1980s by pumping up this Simon & Garfunkel tune, but the new scaled back version, with all three women singing in unison, still finds them having fun.

The same could be said for “Let It Go,” a catchy song about accepting the end of a relationship, that originally appeared on the Different Light album.The bare bones arrangement emphasizes how well the song is constructed, and once again, the harmonies are first rate. Even some well-known critics have falsely claimed The Bangles never wrote their own material, but “Let It Go” is just one of their many self-penned power pop gems.