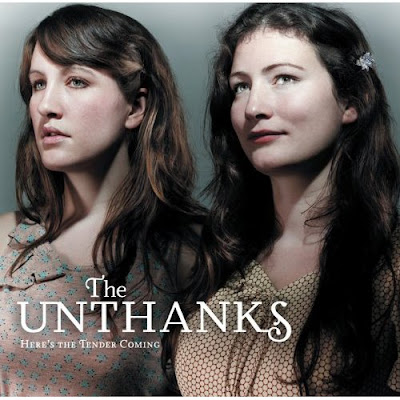 Anyone who’s ever listened to Steeleye Span or Fairport Convention will be on familiar ground with Here’s The Tender Coming, although The Unthanks don’t amp up their versions of traditional folk songs the way those bands did. The quintet also doesn’t go in for the ghostly ambience of Clannad on this 2009 release. Instead, Rachel and Betty Unthank, along with Niopha Keegan, use their gorgeous vocals to honor the struggles of England’s working class people. Multi-instrumentalist/back-up vocalist Adrian McNally and guitarist/back-up vocalist Chris Price round out the group, and there were several guest musicians involved with the recording.

“The Testimony Of Patience Kershaw,” with lyrics based on the actual words of a 17-year old girl speaking before the Royal Commission on Children’s Employment in 1842, is heartbreaking in its description of working in the coal mines. Feeling nothing will come of the commission’s efforts, Kershaw ended her appearance with a curt, “God bless you sir, at least you tried.” The short and a cappella track “Where’ve Yer Bin Dick?” underscores the frustrations of a lower class man’s failed attempts to woo a fair lady or even read a book, with lines like, “Were it worth it, were it hell?”

“Living By The Water” has a classical music feel augmented by piano and violin, while the more active arrangement of “Lucky Gilchrist,” a recently created tribute to a late friend, exudes a hint of modern jazz. The CD’s liveliest moments come on the hidden track “Betsy Bell,” which incorporates piano, horns, tap-dancing, and bawdy humor in the traditional tale of a woman’s unending search for a husband.