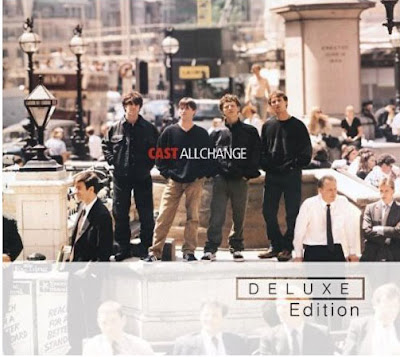 Singer-guitarist John Power had two shots at being part of the next big thing in rock, only to see both opportunities fizzle. His critically acclaimed first band The La’s broke up after one release; and Cast, which he founded three years later, couldn’t sustain the buzz generated by its first effort. The recently released All Change Deluxe Edition illustrates why Cast’s debut caused such a sensation (Noel Gallagher of Oasis once compared a Cast concert to a “religious experience”) and adds a whopping 28 bonus tracks.

The original 12 songs from the 1995 CD hold up well, particularly the infectious hit singles “Alright” and “Finetime.” Power’s work here could serve as a textbook on writing exquisite power pop melodies, and he creates gorgeous, adventurous harmonies with bassist Peter Wilkinson. The provocative lyrics on “Promised Land,” “Mankind,” and “History” position Power as a sort of frustrated messiah ala Pete Townshend’s Tommy.

The nine previously unreleased tracks include gems like the easy-going “Flying,” catchy “Follow Me Down” and well-crafted “For So Long,” along with some less distinctive, but still interesting efforts. All Change Deluxe Edition also offers early demo versions of the original tunes, as well as live performances on the BBC.