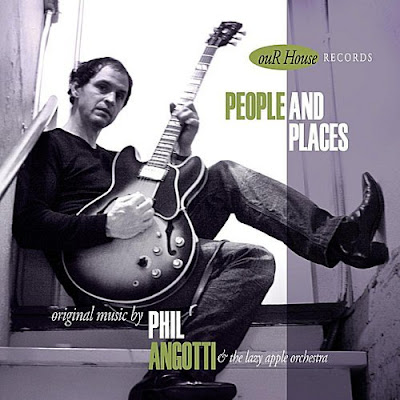 Phil Angotti has a gig with his band coming up on Saturday, June 18th at Martyrs. He’ll also be be performing as part of Material Re-Issue as the opening act for The Lemonheads at Taste Of Chicago on June 28th. Plus, the word is, he’ll have some more tribute shows, like the one he recently did featuring Paul McCartney’s Ram album, coming up in the near future. Anyway, here’s a review of his latest CD I did for the Illinois Entertainer.

As a founding member of The Idea, vocalist-guitarist Phil Angotti is probably most often thought of as a power pop musician. But his latest release is an exploration of roots rock music and complex emotions that calls to mind fellow Chicagoan and Dolly Varden frontman Steve Dawson’s masterful solo effort, I Will Miss The Trumpets And Drums. It’s possible Angotti was inspired by that effort, especially since Dawson, along with Mike Zelenko, Brad Elvis, Carolyn Engelmann, and Tommi Zender, is part of the Lazy Apple Orchestra Angotti recruited to help out on People And Places.

The Country & Western tune, “You Were Right (Probably)” depicts a man casting a melancholy glance toward his past as Angotti sings, “I thought all that I did had a just cause/Now I regret almost everything.” Dawson provides back-up vocals and plays slide guitar on the folksy tale, “Railroad Angel,” while singer Jacky Dustin harmonizes with Angotti on the Byrds/Dylan influenced “Same Ol’ We.” “Broken Baby Doll House” has more of that Beatles influence Angotti has so successfully tapped into throughout his career, and “National ‘36” exudes a blues rock bar band feel. People And Places is a well-crafted effort that covers a lot of musical ground.