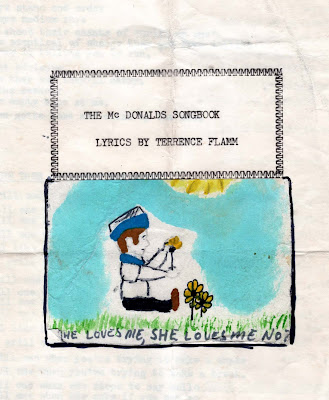 This is a publication from around 1970, and I know for sure that no one else has a copy except me. It’s a typewritten anthology of rock song parodies I created while working at a McDonald’s in the posh Beverly neighborhood in Chicago. I even did the poignant cover illustration myself.

I used popular songs to vent the frustrations of minimum wage labor in a sweltering fast food joint, as well as to express my fascination with various female customers. I had quite a few crushes back then, including a statuesque blond who worked at a health club across 95th Street, some sales girls from the nearby William A. Lewis clothing store, the daughter of a local business tycoon, and a mysterious brunette who gave me the strange sensation we must have known each other in a previous life. I swear there were times, when I sensed her presence even before I saw her.

And so I created parodies like “What Do You Get When You Buy A Mac?” to the tune of “What Do You Get When You Fall In Love?” There were a number of Beatles parodies, with lines like, “I am the meat man, I am the bun man, I am nauseous. Goo goo goo joob” and “She’s in line with me and feel fine.” I used a parody of “Norwegian Wood” to spin the humiliating true life tale of the time I tried to flirt with a gorgeous dental assistant and wound up blushing so deeply she laughed in my face. It ended with the lines, “Then I turned around and I saw that the drive-in was packed/With everyone laughing at me, so I hid in the back.”

Ah, rock and roll and young love. I also created three comic books while working at McDonalds, one of which was confiscated by management and never returned. Many years later, I wrote a mini rock opera of parodies based on my experience of working at Arthur Andersen at the time of the Enron crisis. Famous In The Future, the comedy group I was a member of at the time, was kind enough to perform it with me. We sold out shows and were written up in the Wall Street Journal, Chicago Reader, Chicago Tribune, and a number of local papers. Had that dental assistant only known the fame I would later go on to, she might have regarded my beat-red face as an honor rather than something to laugh at.