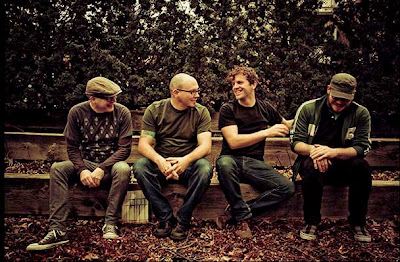 Da Popes. Somehow the idea of attending an event called SausageFest conjures images of the Super Fans on Saturday Night Live enduring cardiac arrest while expounding on Da Bears and Da Bulls. But at least some of these guys must like dat dere punk rock because Chicago’s own Smoking Popes will be headlining the Fest on Sunday night at 8:30 PM. Smoking Popes have a new CD out called This Is Only A Test, which I highly praised in a recent issue of the Illinois Entertainer. I’ll post the full review here some time next week. SausageFest is taking place at the corner of Sheffield and Addison, in the shadow of Wrigley Field. Tell ‘em Coach Ditka sent ya.

And Now Something For The Wine & Cheese Crowd. If you see someone holding a Discover Me, I Write Real Good! sign at Chicago’s 27th Annual Lit Fest this weekend, it could be me trying to impress literary agents. But I definitely wouldn’t be the only aspiring novelist at this gathering, which includes book sellers, authors being interviewed about their work, music performances, and even cooking demonstrations. Lit Fest runs from 10:00 AM to 10:00 PM Saturday, and from 10:00 AM to 6:00 PM Sunday on Dearborn, between Congress and Polk.

Get Up And Go-Go. Fans looking forward to seeing The Go-Go’s in concert this summer got a preview when they appeared on Good Morning America earlier today. The band performed live as part of GMA’s Summer Concert Series in Central Park. Despite the early hour, there was a large, enthusiastic crowd and The Go-Go’s were wide awake and rocking out.

Dot Dot Dot Dashes Off Some New Songs. Local synth rockers Dot Dot Dot have been playing gigs across the country, but they’ll be back in town Sunday for a taping of the JBTV. The band revealed on Facebook that it will unveiling five new songs on the music show. Fans can check out the new material on its ReverbNation page.

For What It’s Worth, It Was Worth A Lot. Rolling Stone online has critic David Fricke giving an enthusiastic thumbs up to the reunited Buffalo Springfield’s first gig of their summer tour. The current line-up, which includes original members Stephen Stills, Neil Young, and Richie Furay, performed 15 songs, plus encores at the Fox Theater in Oakland. Fricke seemed particularly impressed with “On The Way Home,” “Rock and Roll Woman,” and “Broken Arrow.” Here’s hoping Buffalo Springfield extends its tour and adds a show in the Chicago area.

Anyone who wasn’t able to get tickets for that sold out Material Re-Issue gig at International Pop Overthrow - Chicago last April should have an easier time checking them out at Taste Of Chicago. The trio, which features new vocalist-guitarist Phil Angotti, along original members drummer Mike Zelenko and bassist Ted Ansani, will be opening for The Lemonheads in Grant Park on June 28th. My review of the IPO Material Re-Issue show at the Abbey Pub can be found in the archives, on April 26th.

Irish Music Fans, Take Note: Celtic Fest is no longer a stand-alone festival, due to the city’s budget cuts, but there will be a Celtic Music Day at Taste Of Chicago on June 29th. Natalie MacMaster with Liz Carroll, John Doyle, and John Williams are slated to headline that night. Performances throughout the day will include Glen Ayre, Kevin Flynn & The Avondale Ramblers, the always mesmerizing Baal Tinne, and Bua. There will also be Celtic dancing at noon and 2:40 PM.

Loyal viewers of the Ellen Degeneres Show will recognize the name Grayson Chance. He’s the teenage singer-piano player who rode a video of himself performing Lady Gaga’s “Paparazzi”at a middle school recital to YouTube stardom and appearances on Ellen’s show. He was the first act signed to her eleveneleven label. Chance will share a bill with actor-singer-dancer Shane Harper at Taste Of Chicago on July 3rd. Attendance might not be as overwhelming as it has been in previous years, since the city recently announced the cancellation of its fireworks display that night.

Other acts worth checking out at this year’s Taste Of Chicago include Archie Powell and The Exports at 2:40PM on June 25th, and the Crosby, Stills, & Nash tribute act at 5:20 PM on July 2nd.

I always thought "Rubella" was one of the greatest singles of the '90's. It still sounds great today.