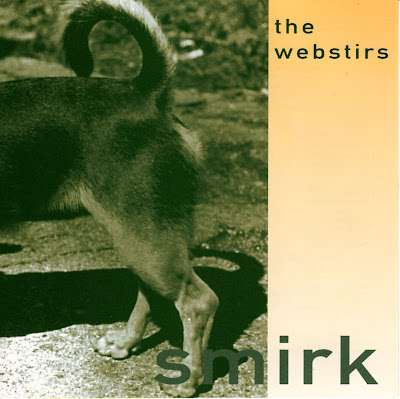 The Webstirs will be performing a gig at Quenchers this Saturday night that’s being called a Re-Present SMIRK - Record Release Show. The Chicago power pop band will be performing its 1994 debut, which has recently been remastered with bonus tracks, in its entirety. I’ve seen The Webstirs play a few International Pop Overthrow gigs over the years, and they’re always a lot of fun.

Here’s a review I did for the Illinois Entertainer back when Smirk was originally released. At the time, I was working a temp job as proofreader at a graphic design firm in Chicago’s River North area. If memory serves, one of the designers had worked on the Smirk CD jacket, and said she had removed the dog’s private parts in Photoshop.

Smirk, the debut from The Webstirs, strikes an unlikely balance between eccentric British pop and straight forward Midwestern rock. The Chicago quartet’s singing-songwriting duo of guitarist Preston Pisellini and keyboards player-horn player Mark Winkler set their wry social commentary and working class frustration to energetic arrangements. They also tap into the music hall zaniness that has inspired U.K. acts from The Kinks on down to Blur and The Wonder Stuff.

The catchy opening track “You Can Hang Around” features a honky-tonk piano break, while the clever “Only Thirty Three” offers a requiem for vinyl records that begins with the scratchy sound of a phonograph needle. The slightly sick musical tale “Maurice Klybatzia” evokes The Hollies or pre-disco Bee Gees. Elsewhere on the CD, The Webstirs hammer out melodic rock songs like “Stone On The Ground,” “Old Enough,” and “King.”